On October 14 and 15, the Oriental Astronomical Association’s general meeting was held at Takamatsu city in Kagawa prefecture. With about 80 people participated, it was run flawlessly.
At the general meeting, the discoverers of new astronomical objects were awarded. The OAA awards and certificates of appreciation were also presented by OAA president, Tsutomu Seki. These two days were very rewarding with lectures by University of Kagawa professors as well as an informal get-together. The local astronomical association rendered enormous support for the smooth running of the meeting, and I am very grateful for their painstaking efforts. 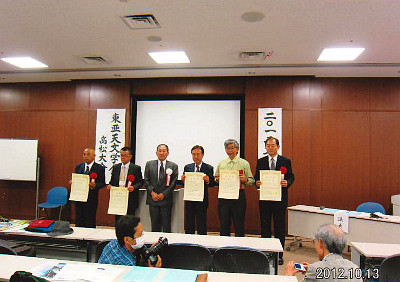 For a post-conference excursion, we enjoyed the renowned Takamatsu noodles and 30 interested members visited Geisei Observatory in the adjacent prefecture by a chartered bus. Mr. Shigeo Shimomoto, who had been waiting for the arrival of the bus, described Geisei’s telescope to the group.

It was cloudy that day unfortunately. If it had been clear, the star of Toatenmongakkai (the Oriental Astronomical Association, Minor Planet 3935), discovered at Geisei in 1987), would have been shining as if blessing the general meeting. I believe that as long as this star shines, the OAA will live on forever.
The photograph shows Minor Planet Toatenmongakkai taken with Geisei’s 70cm reflector on October 24, 2012. It was shining brightly at 16th magnitude moving through Gemini.