November 23, 2010
There is a bronze statues of Ryoma's wife Oryo and her younger sister Kimie on Kotogahama beach, not far from Geisei Observatory.
Along the beach there is a stretch of pine trees planted in 1835, around the time when Ryoma was born. The beach is called Kotogahama (the beach of Koto; Koto is a traditional string instrument) because the pine trees along the beach make a koto-like sound when gale-force wind blows. Around the time when Geisei Observatory was built, it was simple and rustic but a beautiful beach. It is now urbanized coexisting with facilities such as an open-air theater and salt-water swimming pool. I fondly remember the days when I strolled along the long stretch of the beach by myself after finishing morning observation.

NHK TV drama "Ryoma-den" (The story of Ryoma) is now concluded, but I realized that there were people associated with the drama in Geisei village. The husband of Oryo's sister Kimie was from Geisei and also a samurai from Tosa kinnoto (Loyalist clique of Tosa). The bronze statues of Oryo and her sister on Kotogahama raise their arms toward the sky. Of course, they are calling out to Ryoma (Minor Planet 2835) flying across the sky. The statue of Ryoma at Katsurahama beach is gazing at the eastern horizon where Kotogahama lies. 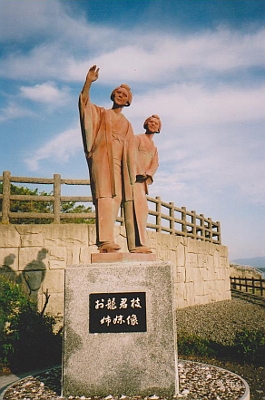 The statues of the sisters Oryou and Kimie


November 10, 2010
An unseasonal "yellow-sand" dust from the Chinese mainland has been hampering observation. The weather station announced the arrival of the dust sometime after November 10, but prior to it we noticed a considerable level of yellow dust on November 9. Even in clear skies, the stars look dull and a few magnitudes seem to be lost.
The photographs show the conditions created by the yellow dust in the evening of November 9 seen from the rooftop (Observatory Code 370) and the street. 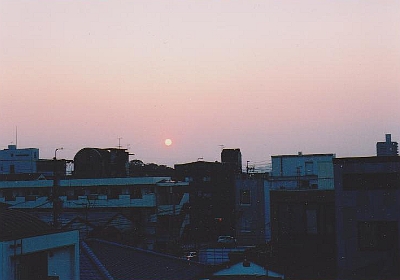 The evening sky viewed from our rooftop

November 5, 2010
This is an image of Comet Ikeya-Murakami taken immediately after its discovery. It is moving southward in Virgo at 10th magnitude and low in the eastern sky around 5 o'clock in the morning. Through the 15cm refractor at 22x mounted on the 70cm reflector, the comet appears as a nebula about 5 minutes in diameter. It is visually estimated at 9.5 magnitude. In the photograph is seen a faint tail-like trail. The tail is gradually growing, while the comet brightness is decreasing.
I have been bravely claiming that there is definitely a chance of visual discovery if seriously searched despite fierce competition from professional searches by LINEAR project and others. My word has been proved correct without a doubt by Messrs. Ikeya and Murakami’s recent discovery and the earlier discovery by Mr. Machholz.
This comet's orbit has a small 8-degree inclination suggesting the possibility of being a short period comet. 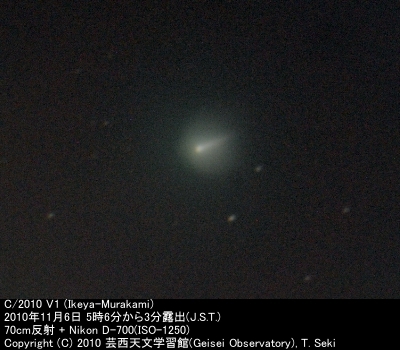