January 15, 2010
We held an open day for the public at Geisei Observatory on the day a partial solar eclipse was visible from Kochi prefecture. Many of the visitors were school teachers. After the talks, we walked outside and observed the eclipse already in progress. It was an evening eclipse and we intently observed the progress of the eclipse with the naked eye while the sun was setting on the ocean in the west. I imagined that, under these conditions, a bulb-shaped image of the setting sun (called Dharma-yuhi in Japanese) might be seen near Cape Ashizuri in the west. Evening solar eclipses occur rather infrequently and it was for the first time I had seen one.
I captured the sun through the trees at the observatory with a standard lens . It was around 4:50 in the afternoon. 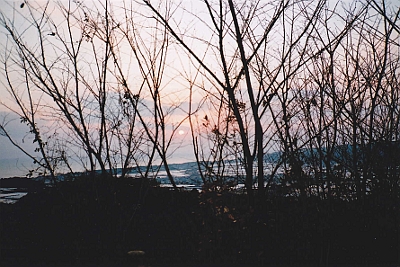