December 28, 2009
It is December 28 today. December 28 is the day I discovered Comet Ikeya-Seki 2. I discovered this comet in the east-southeastern predawn sky. It was a cold day when we were hit by the cold wave near the end of 1967. This comet was visible for many days and became the catalyst for the beginning of my photographic observation. Around the same time, I got acquainted with Mr. Nobuhisa Kojima of Isshiki, Aichi prefecture, who was a good friend of Mr. Ikeya's. Mr. Kojima ground a 21cm mirror for me. This 21cm f/5 mirror was well-made parabolic and mounted on an equatorial built by Nishimura Optical Company. The telescope was very effective in observation of comets and minor planets. It is an unforgettable event that I recovered periodic Comet Finley soon after my observing site had been moved to Geisei village. Before long, the mirror was replaced with a larger 40 cm f/5, which had been kindly made by Mr. Kojima, too. The optical tube assembly of the telescope was all home-built. It turned out to be a very effective instrument under excellent sky conditions at Geisei and discovered five periodic comets. The most memorable was the recovery of Comet Tuttle-Giacobini-Kresak in the autumn of 1978. This comet was thought to have disappeared as a result of a huge explosion. The observations of this comet that year were made only by Geisei Observatory and became a valuable record for this comet.
At the apparition of history-making great Comet West in 1976, I observed it with the 40cm telescope. The well-focused image in this telescope was exceptionally sharp. In those days I was using Kodak's glass photographic plates, instead of film which had a tendency to curl. The flatness of the plates was perfect and only the plates could match the maximum capability of the optics. A photograph of Comet West captured on a plate made the cover of the January 2010 edition of the redesigned Oriental Astronomical Association's journal Tenkai (The Heavens).
This Kojima mirror, which had made successful observations of numerous astronomical objects, was finally retired and replaced by the 60cm telescope. It is now on display in the classroom at Geisei Observatory. The aluminum coating of the mirror appears dulled and cloudy, but in the dim light of the mirror are reflected the scenes of countless extraordinary astronomical events of the past. 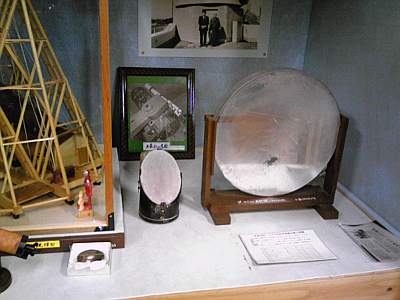 
December 6, 2009
With the naming of minor planet Takasago having become official, the city of Takasago held commemorative events on December 6 and in conjunction with it I presented a lecture titled "Gazing at the stars". I had such an enthusiastic audience that I myself was absorbed in my own talk and drawn into the world of the stars. Most people in the audience were adult members of the public, but I noticed that some of them were stargazers. Later that day, interested people got together and had a great time with lively conversation. Among them were Mr. Hasegawa (OAA president) and Mrs. Hasegawa, Mr. and Mrs. Michikazu Onishi, who helped with the events locally, Mr. Kenzo Kono, Mr. Matsuo Sugano, who had co-discovered Comet Sugano-Saigusa-Fujikawa, and Mr. Shoji Kuwahara of Himeji city.
At lectures, I often come across people among the audience I have never expected to see. This lecture was not an exception and a number of people came to see me after the talk. I autographed for them and enjoyed reminiscing about the old days. Mr. Hitoshi Uwozumi, who had written me letters 40 years before from Tokyo, showed me his copy of my book "Seeking Unknown Stars" together with the letters I wrote to him, which he had treasured and kept for all these years. A lady living locally gave me a rare copy of "Comet Ikeya-Seki Photographic Collection" and we reminisced about the days far back in the past.
The photograph below shows "Comet Ikeya-Seki Photographic Collection" and the January 1966 edition of Tenmon Guide magazine as well as a letter of appreciation presented to me by the mayor of Takasago city that day. 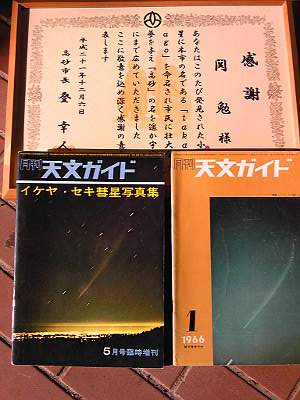 December 4, 2009
Minor planets Echizenmisaki and Okinohama have been named: (65716) Ohkinohama and (65894) Echizenmisaki. Both are faint minor planets discovered by Geisei's now retired 60cm reflector.
A little over 10 years ago, I visited Fukui prefecture to give a lecture. On a sightseeing trip, I experienced an unforgettable scenery of the rough sea around Echizenmisaki promontory. This resulted in the naming of minor planet Echizenmisaki.
Okinohama is located on Ashizuri peninsular surrounded by the bright southern ocean, which makes a striking contrast to Echizenmisaki.
Here is an interesting story associated with the naming of Okinohama. "Kamiharu Aoyama, who was living in Shinjuku, Tokyo, was a girl with a beautiful heart. One day, she learned that a young man living in southern Japan had discovered a new comet and she became attracted to the world of the stars. She wrote letters to this young man frequently. These letters were beautiful prose poems. Kamiharu was looking desperately for something beautiful in the midst of polluted air of the big city. She finally found a world she had never dreamed of. It was the universe. She was inspired by the young man who was pure in heart and seeking a light in the universe. Before long, she fell in love with him. The young man was an idealized person she had created and the result of her blind adoration.
One day, I had a dream. I was walking on the beach with Kamiharu. I wasn't sure whether it was day or night. It was dark and ahead of us was lying a long stretch of a beach glowing white lit by moonlight. I awoke from the dream and wondered where that beach was.
Several years later, when I was heading to Ashizuri, I came upon Okinohama. It was a beach in Tosashimizu city. The coastline there stretches over 2 kilometers slightly curved along the long stretch of woods of pine trees. It looked exactly the same as the beach I saw in my dream.
I named a minor planet after this beach reminiscing about Kamiharu, an adorable girl who had loved the universe and poems and lived with her eyes fixed on beautiful things.
Kamiharu's soul among the stars in heaven continues to walk along this beach. 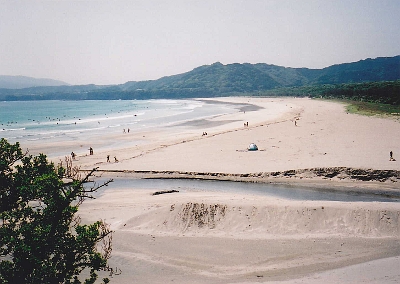