November 18, 2009
At 12 midnight on 18th November, the sky began clearing up miraculously when the Leonid meteor shower was just about to start. At the observatory, I kept watch from inside the dome and at times outside while doing other observational work. I think I saw most meteors around half past 4 in the morning. Twenty to thirty meteors appeared per hour on the average. Although I set up two cameras and continued to photograph for nearly 4 hours, I saw few bright fireballs and captured only one first-magnitude meteor. It reminded me how difficult it was to photograph meteors.
I had been a meteor observer in the 1950s prior to my comet discoveries. While continuing comet search, I kept in contact with Mr. Kojiro Komaki, a meteor observer living in Wakayama prefecture, and was totally immersed in meteor observing. In those days, meteors were observed mostly visually. I marked the path of each meteor on a specially-made star chart and reported the results. Later, I began photographic observation, but with a combination of slow film and poor quality lenses, it would be a miracle to succeed. Managing to photograph just one meteor this time, I recalled my struggle in those days. In an astronomy magazine, Mr. Komaki mentioned three names: Koichi Yoshii, Tetsuma Sakamoto, and me as successful observers in photographic observation of meteors. Mr. Komaki was a pioneering figure in Japan's meteor observation and visited me at home in 1962. It was the year of my discovery of Comet Seki-Lines and I clearly remember the conversation I had with Mr. Komaki and "astronomy adventurer" Mr. Koichi Ike that day. 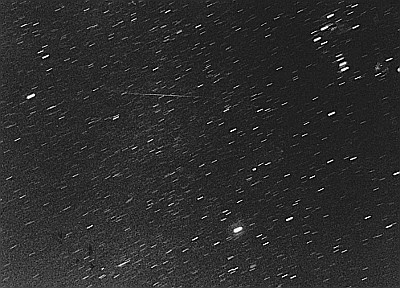 
November 7, 2009
Dr. Tetsuo Hasegawa of National Astronomical Observatory of Japan has sent me a photograph of the magnificent Milky Way over the Andes. I first met him several years ago at the lectures about the ALMA project held at Kochi Prefectural Education Center. The ALMA project is an international collaboration between East Asia (represented by Japan), North America, and Europe and involves the construction of radio telescopes in the Andes. Dr. Hasegawa serves as Deputy Project Manager at Joint ALMA Office in Santiago, Chili. In No. 189 of NAOJ News, he writes that he was drawn into the world of astronomy by reading my book "Seeking Unknown Stars" when he was in 5th or 6th grade of elementary school. I had a similar encounter with an important book when I was in upper grade of elementary school. The book was "Tenmongaku shinwa" (new astronomy book) written by Takehiko Matsukuma. which my teacher gave me. This reminds me of the power of a single book that can influence a person in their developing stage.
This photograph of the summer Milky Way was taken at the ALMA Operations Support Facility (elevation 3000 meters) situated on the side of the Andes. It covers the Milky Way from the Northern Cross of Cygnus in the north to the far south of the famous Southern Cross, stretching as long as 110 degrees. It is truly a panoramic view of the Milky Way. It is said that there are too many stars seen from the Andes that picking out star patterns for constellations was impossible. Instead, they gave the names of various animals to many dark nebulae seen at places in the sky. Come to think of it, the dark nebula known as the Coal Sack is seen near the Southern Cross opening a dark eerie gaping mouth. And the splendid site of the Jewel Box is impressive making a striking contrast with the dark nebulae.
In 2000, standing at the summit of Mauna Kea, I was overwhelmed by the awesome starry skies. I wonder if I can ever have a chance to see the starry skies over the Andes.
I will make a frame for this photograph and display it at Geisei Observatory. 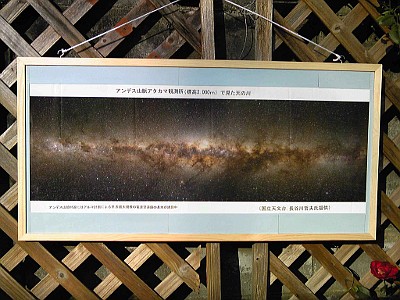 The Milky Way seen at the ALMA Operations Support Facility in the Andes (elevation 3000 meters)
This photograph is a gift from Dr. Tetsuo Hasegawa, National Astronomical Observatory of Japan.