October 30, 2009
Canopus has risen high, as it always does around this time of year. Winter is just around the corner.
As we cleared weeds around the observatory this October, we have a much better view from the observatory now. Canopus is easily visible in the southeastern sky from the observatory's entrance and can be enjoyed for quite a while until it sets.
As I have written before, it was in the early morning of October 22, 1965, that I had first seen Canopus. I saw it when I walked up to Bandanomori in Suzaki city chasing after Comet Ikeya-Seki, which was approaching the sun at that time. "Astronomy adventurer" Mr. Koichi Ike of Tosa city showed me Canopus, which was as high in the sky and as blue as Sirius. Looking at it for the first time, I immediately thought it was Sirius of Canis Major. What is going on here? Why is it so high in the sky and why so bright? The horizon was way below Canopus with a parade of stars and constellations in-between. In Ryunosuke Akutagawa's novel "Toshishun", the main character of the novel Toshishun, led by an immortal sage, flies on a bamboo broomstick to a high mountain called Gabisan and witnesses rare stars from its rocky summit. Canopus made me recall this scene in the story. Toshishun says, "This mountain must be very high. The stars of the Big Dipper looked as large as rice bowls and were shining brightly." I cannot forget the amazing sight of Canopus even now, 40 years later.
At Bandanomori in Suzaki city, a mysterious world of stars awaits you. I hope I can see Canopus someday again from that mountain I traveled to following the comet.
Canopus seen from Geisei is as good, if not better. Bandanomori has become a star too. I remember fondly about the marker we had erected there, which reads: "The site of confirmation of Comet Ikeya-Seki." 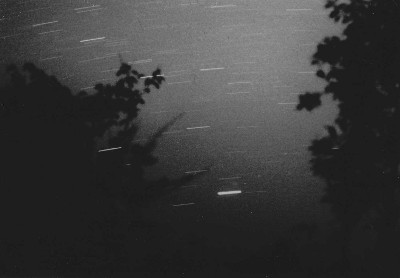