April 25
While looking at a star chart on the computer screen for telescope control, I noticed that 22P/Kopff was glowing in Aquarius in the dawn sky. A memory about this comet goes as far back as 40 years.
"Comet Seki-Ike", of course, doesn't exist, but in the 1960s you couldn't rule out the possibility of its discovery. Mr. Koichi Ike in Tosa city (15km west of Kochi city) was a rival comet hunter and we were furiously competitive for discovery.
In those days I was using the 9cm refracting comet seeker, while Mr. Ike was equipped with a little larger 12.5cm refractor. He would lock himself in his unique floor-revolging observatory and search mainly the predawn eastern sky. The sky conditions were excellent and observing instruments were perfect. "The next comet is mine for sure", he grinned with his inherent large eyes shining with eagerness.
This incident occurred on the early morning of April 25, 1964. I was searching a perfectly clear starry sky with my mind firmly set on the job. Around half past three I spotted a 9th-magnitude fuzzy comet-like object in Aquarius. Nothing was marked at that position on a star chart and there was no prediction of a bright comet appearing there. A half hour later, someone banged the front door. Stunned, I went to open the door to find a whey-faced man standing there. I instantly recognized him. It was Mr. Ike. "Seki-san, I've found it!" said he in a highly excited voice.
Believing he found what I had found earlier, I asked him in and compared the notes. Undoubtedly, we spotted the same object. In the absence of any bright comet predicted at that position, we named this object "Comet Seki-Ike" according to Mr. Ike's suggestion. We sent a telegraph to Tokyo Astronomical Observatory at 6 am. The following day, Mr. Ikeya of Hamamatsu sent a telegraph on the discovery of the same object to the observatory, too.
A reply from Tokyo Observatory revealed that it was the outburst of the famous periodic comet 22P/Kopff. I knew that this comet was listed in the BAA Handbook predicted to be at 14th magnitude, but the sudden brightening by 5 magnitudes fooled up completely. A similar thing happened in 1955. Comet Mrkos discovered that year was supposed to be a new comet, but as a result of research turned out to be long-lost Comet Perrine. As a result, it was renamed Comet Perrine-Mrkos.
I wonder where Mr. Ike is now and what he is doing. He long loved comets and searched for them for nearly 50 years. In spite of his numerous heroic episodes of comet search, he was rewarded so little. I gave his name to a minor planet discovered at Geisei. The naming of Minor Planet Ike (21022) is to symbolize our friendship.
When Comet Ikeya-Seki "kissed" the sun on October 21, 1965, he observed the comet with his unique invention. He built a darkroom to observe the comet during the daytime. It has become an ever-lasting fond memory for me. Mr. Ike, full of adventurous spirit and curiosity, was constantly on the move chasing after comets. His unrecognized achievements will never fade away as long as his star shines in the sky. 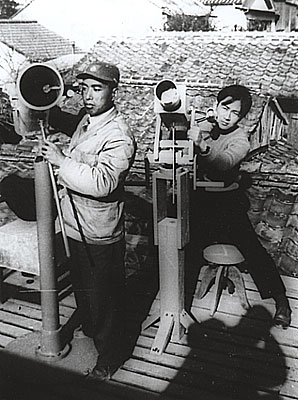 Mr. Koichi Ike (left) and I chasing after
Comet Seki-Lines in broad daylight
Photographed in April 1962


April 5
There is an interesting attraction in Kochi city called "Street Number 33 on the Earth" located at Yayoi-cho, a town downstream Enokuchigawa River running through the middle of Kochi city.
This is where longitude 133 degrees east and latitude 33 degrees north cross each other. The exact position of the longitude and latitude lines crossing is located in the stream of the narrow river only 30 meters wide. Thirty years ago, a monument was erected there, but relatively recently a new duralumin globe has been attached to the top of the monument.
Around 1965 when I discovered Comet Ikeya-Seki, there was a newspaper reporter living in that area. On every important occasion he came over to cover the news. Interestingly, on his business card he wrote "in the vicinity of Street Number 33 on the Earth" for his address. He did so because the area he lived was a jumble of houses and narrow streets and it was very difficult to locate his home. "Street Number 33 on the Earth" must have been a lot easier to find.
When I visited him, I ended up at a house one block south of his place by mistake. Believe it or not, I found two good-looking equatorial astronomical telescopes in the front yard. Needless to say, I didn't know anything about the residents of the house, but realized that there are people who observe the night sky without being known to others. I myself was one of them and a complete novice when I found Comet Crommelin, my first discovery. Learning about my discovery, the then deputy chief of the news department of local Kochi Shinbun newspaper located our place only after searching all over the place throughout the night. He barely managed to meet the deadline to place the discovery news in the morning paper.
Reminiscing about those days, I took a shot of the monument with a spy camera called Gami-16. How did its Esamitar f/1.9 25mm lens work? All the details in the distance are brought out beautifully. 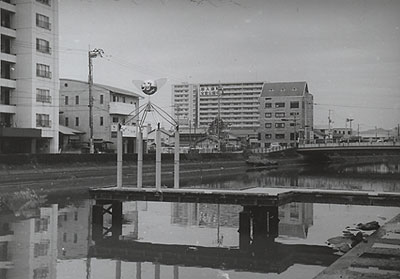 
My favorite Gami-16 works perfectly well and does not require any repair by "Mr. Galileo Galilei", president of Officine Galileo of Milan. 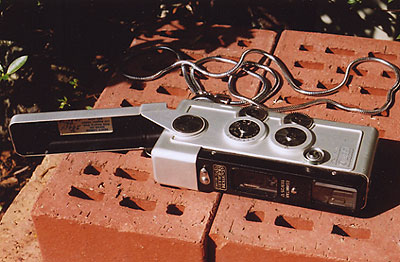 Spy camera Gami-16 made by Officine Galileo of Milan