November 19
Mars and Venus are bright

Comet Holmes is still visible to the naked eye in Perseus in the northern sky. It is exciting that the comet is visible almost all night, as it is high in the northern sky. The changes in magnitude, appearance, and color keep me intrigued. The tail still looks like a stubby jellyfish, but the coma continues to expand and has become faint. It has begun to take on the appearance of fog. The photograph presented in Reports from Geisei Observatory was taken when the comet was the most beautiful with the translucent coma. The outline of the coma was still well-defined around that time.

Mars is expected to make a very close approach to the earth in late December and has become increasingly redder. It is in Gemini and shining very brightly. Close to 5 o'clock in the morning, a little before the beginning of morning twilight, Venus near the greatest western elongation begins to rise, blazing magnificently with white light. Its intense brightness distracts me from comet search.

At Geisei Observatory, we will hold a public viewing night on December 22, which will be the last to use the 60cm reflector. For the Winter Astronomy Class, we are planning to show approaching Mars through the 60cm telescope. In December there will be a number of public observing sessions with Mars being the main subject of viewing.


November 13
Autumn has deepened, while I haven't made diary entries for some time. I searched the eastern sky this morning for the first time in many days. Beginning with Leo, I moved to galaxy-rich Coma Berenices, then Virgo and on to Corvus in the predawn skies. A small "Navigator" system (digital setting circles) attached to the telescope turned out to be effective for identifying comet-like objects coming into the eyepiece field. I chose Polaris and Regulus in Leo, about 90 degrees apart, for initialization. This device displayed object positions with good accuracy. It was comparable to the accuracy achievable from sketching. I was able to identify all the objects using the Skalnate Pleso star atlas.
While searching, I realized that the way I conduct comet search at present would not be conducive to discovery. I sweep the sky while simultaneously doing some other observational work such as photographic observation. I am fully aware that, unless I concentrate only on searching, there will be no successful discovery. I wish I could put heart and soul into comet search, but the current multiple observation prevents me from doing so. I dearly miss the days when I was able to think nothing but comet discovery, pouring my youthful and pure passion into searching.
While reading mysteries of Sherlock Holmes, another Holmes appeared in the heavens and began to behave in mysterious ways. The stories of Sherlock Holmes are set in London. Coincidently, Comet Holmes was also discovered in London in 1892, roughly the same time when the Holmes stories were written. In the year of the discovery, it became unusually bright and shined near M31 at 4th to 5th magnitude. Is this comet intrinsically bright? Had it faded and remained faint for 100 years since the discovery? Or is it a faint comet by its nature, but on rare occasions did it brighten enormously because of solar activity? It is not clear to me, but I think the latter is the case. Whichever the truth is, it is exciting to conduct search under a brightly glowing comet overhead. According to my observation at 23.00 on November 12 with 50mm binoculars, its total magnitude was 2.6 and coma was 30 minutes in diameter. It was blue-white with the tail faintly trailing to the northwest. It was bluish, typical of a comet, unlike a golden color at the time of outburst. A color photograph of the comet will be presented shortly in Reports from Geisei Observatory.

November 12
This is a photograph of 17P/Holmes taken by the 21cm Epsilon telescope around 2 o'clock on the morning of November 11. In the photograph the comet appears brighter than 1.8-magnitude Alpha Persei. Visually it was 2.5 magnitude. The coma was extensive and nearly 30' in diameter, similar to the diameter of the moon. It was a beautiful green. The tail was not clear because most of the tail trailed behind the coma opposite of the sun. Judging from the shape of the coma, the tail seems to extend a little to the west. It just looks like a mysterious jellyfish floating in space.
At the end of last month, the comet rapidly brightened from the 17th magnitude to 2nd magnitude with a huge, but puzzling eruption. This outburst cannot be explained by reflected sunlight. Perhaps the eruption caused the comet to emit light. The energy of the outburst is immeasurably large. The coma has changed its colors astonishingly fast from golden to white, then blue to green. Comets are generally fuzzy, but peculiarly the outline of this comet is as sharply defined as that of the moon.
This comet was discovered by Holmes of London in 1892. Comet Holmes displays many puzzling phenomena and reminds me of Sherlock Holmes in the English detective stories. The stories are set in London and mysterious incidents occur one after another just like Comet Holmes undergoing mysterious changes.
This comet was recovered by Geisei Observatory in 1992. It was just faint without any changes in brightness. This year's return is the 17th since the first appearance 115 years ago.
I will show you the color image of this rapidly changing comet in the next diary entry. The changes this comet has undergone are the first in the history of my comet search and will be recorded securely in "Detective Tsutomu Seki's Diary of Investigation of Comets." 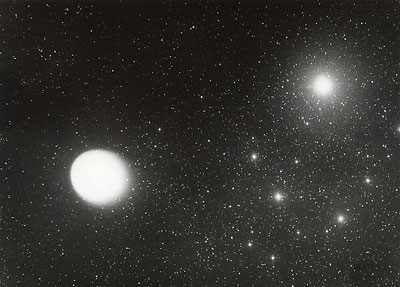