Around the time of the harvest moon, a period of September to early October, weather is usually not favorable and I have rarely seen the harvest moon clearly. Even if it is visible in the sky, I have never viewed it to my heart's content, because there are always a lot of clouds around, making it look like a scene in classical Japanese paintings.
Katsurahama beach, famous for its picturesque scene with the moon in the sky, is not far from my place. I visited there once when I was in my 20s, but since then I have never been back. Crowds were always on the beach and, mixed with a smell of sake, the atmosphere was not conducive to quiet appreciation of moon. We had a rare harvest moon tonight in the clear sky and I viewed it from my garden. The moon was above the low roofline in the south. It was 14 days old and a little short of full moon. I can't remember when, but saw a total eclipse of the harvest moon bathed in red hues. The summer moon appears a little reddish, too, perhaps because of moist air.
Suddenly, a strange thing happened. When I was looking at dappled shadows cast by the trees in a small garden, a pretty flower caught my eye. It was "gekka-bijin (beauty under moonlight)" or a "queen of the night". I discovered a small bud shooting from green leaves a few days ago, but never thought it would open this ealy. It was blooming as if showing off quietly its graceful appearance to the harvest moon. I believe it was a 13-day-old moon, near full moon, when another one bloomed in July. And this one tonight opened when moon was 14 days old. As its Japanese name suggests, gekka-bijin or beauty under moonlight literally opens under moonlight near full moon. Its short-lived flower wilts in a few hours. It is a beautiful sight, but makes you feel a tinge of sadness. This plant was given to me in a pot by school children in appreciation for my talk at the school a long time ago. After a long while it finally began flowering. It would be interesting if the next flower opens again on the night of full moon. This timing is not accidental. It blooms to be viewed by full moon when it visits the flower at mid night.

September 18
It is an early autumn evening with clear skies. The temperatures are still more like those of mid summer, though, and I can sense approaching autumn only by hearing vigorously singing insects.
I was excited by the clearly visible gegenschein (counterglow) which I hadn't seen often in recent months. The summer Milky Way has moved to the low western sky and a dark starry sky lied east of the Milky Way. Moving further east, I came to a glow similar to the Milky Way. This is the gegenschein that makes the sky exactly opposite the sun glow white. At midnight it lied between the square of Pegasus at the zenith and Fomalhaut shining lonely in the deep south. Its glow was large and faint, appearing to be more than 30 degrees in diameter. It is less than half the brightness of the faintest part of the winter Milky Way and visible only from the darkest sites in Japan. I encourage observers to try if they can see it from their own observing sites.
The earliest sighting of the gegenschein in Japan was made by Mr. Kaname Nakamura in Kyoto during the Taisho period (1912-26). It could have been visible from Kochi in those days. In the early part of the Showa period (1926-89), there was an observatory for the zodiacal light at Setomura in Okayama prefecture and Mr. Minoru Honda was observing the zodiacal light as well as the gegenschein at the observatory. It was where Mr. Honda discovered his first comet. Now a highway runs near this site and the renowned dark skies there are lost. It makes me very happy that from Geisei I can still occasionally see both gegenschein and zodiacal light. From late autumn to winter the gegenschein will be visible more brightly against the backdrop of Leo and Virgo.
Completing the night's observation of comets with the 60cm reflector, I searched the eastern sky with my 15cm comet seeker. Although it was a small altazimuth-mounted telescope, I used the "Navigator" (digital setting circles), which displays the position of an object.
Yes, 42 years ago today, I discovered Comet Ikeya-Seki! When the field of view moved to east of Canis Major, I searched with great care, because it is the area where comets of the Kreutz group appear. The globular cluster NGC 2506 moved into the field which was near where Comet Ikeya-Seki had been discovered. The comet seeker I was using at that time was a small 9-cm telescope and could not resolve this globular cluster into stars. But this time my 15cm binoculars resolved it clearly into myriad faint stars. The Navigator was displaying the cluster's position accurately. I don't think I will find a Kreutz comet tonight. It is very unusual to find even one Kroutz during one's life time. Encountering a Kreuts twice in one's life is quite an event... I was talking to myself. The comet seeker's field of view was shifting to Leo in the early twilight.
Venus at the maximum brightness surprised me. With the appearance of dear old Orion and blazing Sirius I sensed the steady progress of season toward autumn, in spite of the summer-like heat.


September 16
Ishigakijima is a small town with a population of a few tens of thousands, but, while we were driving around the island, it appeared large than the population suggested. I was impressed by strikingly blue color of the ocean reminiscent of tropical coral reefs and beaches of slightly yellowish, very fine sand grains. At famous Kahira I marveled from a sight-seeing boat at variously colored corals and swarms of tropical fish in shallow water. I was accompanied by Mr. Takeshi Miyaji, deputy director of the observatory, and Mr. Okabe, a journalist from the Kochi Shinbun newspaper.
In the afternoon astronomy lectures were held at a community hall. Most of the audience were adult community members, while young students I had anticipated were mostly unable to attend it because of their school field days or some other events.
It was September 16 and another typhoon was approaching this island. Forty-two years ago today, 3 days before the discovery of Comet Ikeya-Seki, a strong typhoon was approaching Kochi. Naturally, I directed my talk to the discover of Comet Ikeya-Seki. Miraculously cleared skies in the wake of the typhoon, an overused home-built telescope with a 9cm objective lens, an encounter with the comet during the 15 minutes under moonlight before the morning twilight closed in. It was a discovery all blessed with miracles. And the comet's plunge into the sun one month later, its miraculous survival, and impact on my attitude to life, so on and on.    Staying at the same hotel in the city that night, I had a useful meeting with members of a local astronomical club at their usual hangout.
The following day I flew out of Ishigakijima in the middle of heavy rain as if trying to get away from the approaching typhoon. I headed home remembering the generosity of members of Yaeyama Astronomical Club and Mr. Miyaji of the observatory. 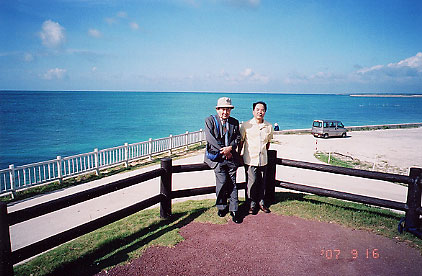 With Deputy Director of the observatory Takeshi Miyaji (right)
The background is the sea around Ishigakijima. 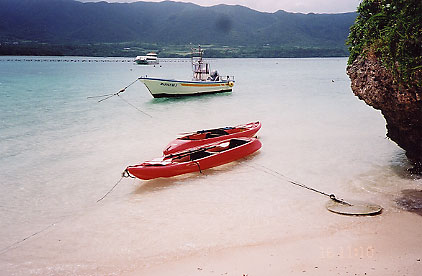 The beach of Kahira


September 15
Because of my involvement in the naming of a minor planet after the local word "murikabushi", the nickname of Ishigaki Astronomical Observatory's 105cm reflector, I had a chance to come to Ishigakijima Island I had been longing to visit. The visit coincided with the passing of the typhoon over the island. Mr. Okabe, a reporter of the Kochi Shinbun newspaper accompanied me on the same flight.
We were met at the island's small airport by Mr. Takeshi Miyaji from the National Observatory and immediately headed for the observatory on the hill overlooking the ocean. The white dome of the observatory was seen from the plane shining in the distance for some time before the plane landed at the airport.
The dusk was just closing in on us at the end of a long subtropical day and we saw from the hill the magnificent expanse of the ocean and beautiful lights of the city. The city lights did not bother us much as many of them were sodium lamps acknowledging the presence of the observatory. Jupiter was due south at 20 hours and Scorpius and Sagitarrius were surprisingly high in the sky. The latitude here is 24 degrees north, as much as 10 degrees lower than that of Geisei. Alpha Crucis, the southernmost star of the Southern Cross, rises more than 2 degrees above the horizon, they say.
I had a chance to look at Jupiter at about 200x at the Nasmyth focus, close to the lowest effective magnification the 105cm cassegrain telescope could deliver. Because of the large aperture of the telescope, it was vulnerable to the effect of seeing. However, Jupiter appeared dazzlingly bright and at moments of good seeing the surface of Jupiter showed an incredible amount of detail with picture-like clarity. The light pollution from the town in the east is relatively mild and, according to an Observatory staff member specializing in the study of minor planets, they can go as deep as 20th magnitude with a CCD camera, though they haven't challenged 21st magnitude objects yet. The views of the Galilean satellites were excellent. However, they appeared almost as pinpoints. A past observer claimed that he had seen markings on the Galilean satellites using a 20cm telescope. Looking through the 105cm telescope, I got the impression it was almost impossible to accomplish such a task. I am not in favor of sketching the planets because the results are affected by the observer's subjectivity and illusion.
It would be great if observers on this island would begin searching for novae and comets, as the view of the southern Milky Way is excellent.
Although this observatory is run by the government, it is fortunately open to the public and operated in cooperation with them. There were many people visiting the observatory that night for public viewing sessions. Members of the public seemed to be looking after the night's visitors. With guidance provided by the observatory, there should be observers in the future who can contribute to astronomical discoveries. In the lecture I am going to deliver tomorrow, I will choose a topic that will inspire local observers and encourage them to strive for discovery of astronomical objects emphasizing the observatory's advantageous location for observing the southern sky.
After the tour of the observatory, three of us took a commemorative photo against the background of the starry sky of the south. Hearing faintly the sound of waves from the south, I remembered the time I had headed for the South Pacific following Halley's Comet. I realized that I was now standing at the southernmost point of the Japanese archipelago. 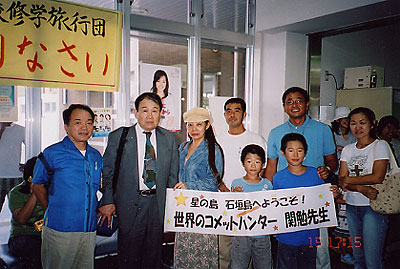 At Ishigakijima Airport
(from left) Mr. Miyaji, deputy director of the observatory, Seki, and members of Yaeyama Hoshinokai (astronomical club)