August 29
A public observing night was held at Geisei Observatory for the total lunar eclipse last night. We had a full capacity crowd of about 40 people. Though there were some clouds, the participants enjoyed a magnificent view of the eclipse. The reddish moon during the totality is always magical.
The following day I returned to the observatory with Mr. Keiichiro Okamura to do some work. The forecast for the day was cloudy or rain, but I feel weather forecast is often wrong even with meteorological satellites' watchful eye. The day turned out to be a hot, clear day. The forecast says it will be cloudy or rainy for next 7 days or more, but I wonder if such bad weather continues that long.
Once upon a time there was a weather forecaster called "Kuromatsu" at a weather station somewhere in Japan. As you can expect, weather forecasting those days was often inaccurate and Mr. Kuromatsu's forecast was rarely right. Consequently, he became known to be synonymous with inaccuracy. One day a senior military officer advised to conscripts being sent to battle fields: "You should yell Kuromatsu again and again on the field. Enemy bullets will never hit you." The joke is still being told even today.
There was a fisherman in a fishing village somewhere in Japan. He was not a professional weather forecaster, needless to say, but said to be quite accurate in predicting weather based on his long experience watching the appearance of the clouds and wind directions. Other fishermen trusted this old man's weather prediction and would leave the port early in the morning feeling quite secure.
Mr. Kei Okamoto, my primary school teacher who loved nature, told me this story. On a summer holiday he embarked from a fishing port near Cape Ashizuri on a geological research tour to a remote island in the south hiring a local boatman. The weather that day was good, but the experienced boatman, quite knowledgeable on the local weather, said to him, "Judging from the wind direction, it will become stormy in the afternoon. I will pick you up a little earlier." Mr. Okamoto wasn't quite sure if he should really believe him, but surprisingly the weather turned stormy that afternoon and the old man's prediction proved to be perfect. It is a pity that these fishermen's expertise on weather prediction has not been documented and eventually lost. I feel that it may be important not to rely too heavily on numerical forecasting, but to develop some kind of intuition built upon field experience.
We spent a half day to install an elliptical secondary mirror on the 60cm reflector. Geisei's 60cm is an astrograph and wasn't set up for viewing through the side of the tube with a secondary mirror like a typical Newtonian telescope. We installed the 25cm-diameter secondary mirror, which had been in storage since the opening of the observatory. We are now able to observe visually through the 60cm telescope. The elliptical mirror weighed 16 kg and it was extremely difficult to install such a heavy mirror high above the floor. We managed to finish the job though we faced a physical danger all the time. We also achieved a perfect tube balance. Any type of visual observation has now become possible with the 60cm mirror. As a result of the altered optical configuration, the film size is reduced from a 60mm x 70 mm format to a smaller 35mm film format. Until then visual observation had relied on the 20cm refractor attached to the 60cm scope, but now we can look through the 60cm scope. Later I will show you images taken with the 60cm's perfect parabolic mirror without the field flattener lens. 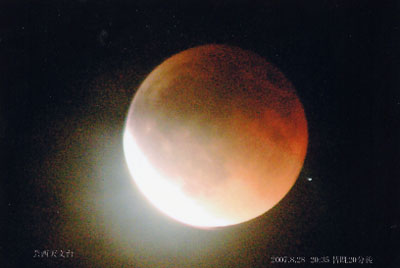 
August 4
I went to Tokushima to give a lecture for the annual Hands-on Science Festival organized by the engineering department of Tokushima University. I took the highway to Tokushima, but for a return trip I drove along Route 192 and 32 at a leisurely pace. I had a chance to enjoy the views of Yoshinogawa River running through the mountains. I believe one of the minor planets discovered at Geisei was named after "Yoshinogawa".

I was told this was the 11th anniversary of the Festival. Dr. Atsushi Mori, who helped in many ways to organize this event, happened to be a son of the famous comet hunter Mr. Hiroaki Mori of Gifu prefecture. My lecture was titled "Comet mysteries and comet search". Because I noticed so many junior high school students in the audience, I avoided technical matters and talked in such a way that it would give these young people dreams through astronomy. I included many interesting episodes in my talk, too. The audience was so well-mannered and attentive that I thoroughly enjoyed speaking to them and was not aware of the passing of time. 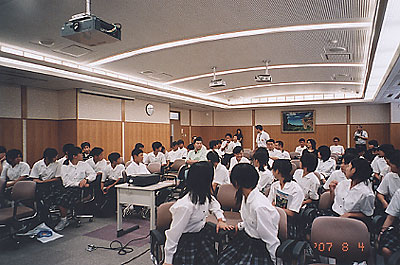 Many junior high school students in the audience


After the talk I enjoyed superb astrophotographs taken by members of the University's astronomy club. Particular images of the Milky Way stood out among these photographs. They were taken with a CCD camera on the 113cm reflector at the Anan Science Center Nakagawa Observatory (formerly Nakagawa Science Center Nakagawa Observatory) in Tokushima prefecture. This event overarches all the fields of science and generated a huge turnout of families. Unlike Toskushima Kochi prefecture does not own a science museum nor planetarium and I suspected it would be more than 10 years behind other prefectures in the level of children's interest and knowledge in science. Though Kochi has long excelled in politics and sports, it is lamentably inadequate when it comes to science.