April 29
We held a public viewing night today at Geisei Observatory assisted by Mr. Oba, a staff member. About 25 people participated. Despite very bright moonlight close to full moon, Venus and Saturn were beautiful thanks to stable air.

At 19:25 a bright artificial satellite appeared in the northwestern sky, passed overhead, and flew to the east-southeast. It was as bright as Jupiter (-2 magnitude) and orange in color without flashing lights typical of an airplane. There shouldn't be any passenger plane flying to that direction. As I didn't hear any engine noise, I think it was a satellite flying close to the atmosphere. Though I have been watching artificial flying objects since about 1959, I have never seen anything this bright except for satellites just about to plunge into the atmosphere.

I observed C/2007 E1 McNaught in the western sky after the end of the viewing night. It had faded to about magnitude 15.

April 18
It is mid-April and in the middle of spring, but was unusually cold all day today. The mountains of Otoyo town, where Kajigamori Observatory is situated, were reported to be covered with snow, looking like a typical winter day.

On a day like this the stars in the sky looked magnificent and the summer Milky Way appeared bearing down on us on the ground. The gegenschein (counterglow) was even seen in the dark part of the sky around Virgo.

After completing observations with the 60cm reflector, I searched for a comet for one hour in the morning. I came across Comet Machholtz 1 during the sweeping, which was at magnitude 8.5 with the coma 2.5' across. A faint tail appeared to be trailing.

I saw M31 in Andromeda for the first time in many days. The galaxy looked very large because of excellent sky transparency. I followed through a cumbersome set-up procedure of my "Navigator" (digital setting circles) and with some confidence was able to search low altitude skies in the morning twilight. 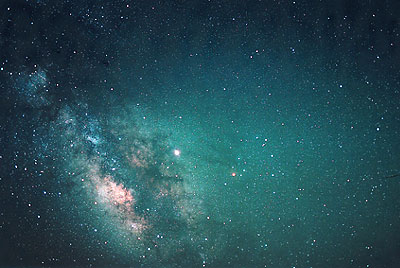 
April 8
I returned home on the night of April 8 after the successful two-day Comet Conference. It was a fruitful conference attended by people all passionate about astronomy. In my lecture I gave at the conference I stressed that there is still a chance of visual discovery by amateurs if they continue to search diligently. I gave them two examples of successful visual discoveries by amateurs, although amateurs may feel that searches by professional astronomers of the LINEAR project a threat to their chance of discovery.

These two examples are recently discovered Comet Levy (C/2006 T1) and Comet Machholtz (C/2004 Q2). I showed the audience the ephemerides of the two comets over a period of about a year and half until its discovery and explained how these comets had been captured by amateurs but missed by professional astronomers due to particular positions of the comets in relation to the sun. I also told them that the chance of visual discovery had fallen to a third since the search by professional astronomers began. However, visual discoveries have continued steadily without the pace of discovery falling dramatically since the time when the LINEAR project started about 10 years ago. Unlike professional astronomers amateurs are not pressed to make achievements every year. It would not matter if they could find only one or two comets in their lifetime. Many comet hunters began their search inspired by a thought that a comet bearing their name might shine in the sky some day. I emphasized that such a chance should visit them in the future.

In the past some amateurs stopped searching for comets upon the announcement of the LINEAR project believing the era for amateur discoveries had come to an end. When they stopped searching, all the efforts they had made would be wasted and whatever achievement they had made would be forgotten. One's achievements will glow forever by continuing their search.

During my stay at Niigata, I met many warm-hearted people. The impression of these people merged with the image of beautiful snow-covered Mt. Hakkaisan, which I was fondly remembering on the train on my return journey. 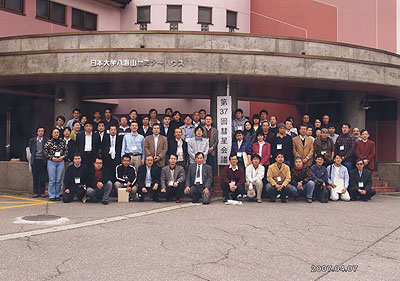 
April 7
The comet conference was held on April 7 and 8 at Hakkaisan Seminar House in Niigata prefecture and concluded successfully. The conference was significant in that it attracted researchers from the National Astronomical Observatory of Japan and other research institutions, students as well as amateur astronomers. I am confident that the conference made a great contribution to the study of cometary astronomy. It should be noted that Mr. Shigeki Murakami, the organizer of the conference, and local members provided huge assistance. Together with support of enthusiastic participants who worked behind the scenes, it was run smoothly and quite enjoyable.

Among the participants were comet discoverers of old times as well as Mr. Akira Takao, who attended the second Comet Conference in Kochi City and visited me at home. I saw some people for the first time in 35 years. I was deeply moved by the occasion. Some participants had started searching for comets decades ago and were still actively engaged. I have a high regard for these people. I had commemorative photographs taken together with many conference attendees and also autographed my old books. Many of the research papers presented were in the field of physics and there were also valuable talks by astronomers. Such talks are not often available to amateurs and general public.

The sky was partially clear on the night of April 7 and we were able to look through a 60cm reflector at the conference venue. It was at an elevation of 500 meters with snow covered Mt. Hakkaisan towering right to the north and the sky conditions were quite good.

Apart from research presentations, I found the conference significant as a pleasant venue for meeting with people whom you would see rarely.

The next conference will be organized by Mr. Kinoshita and others and held in Hiroshima prefecture. 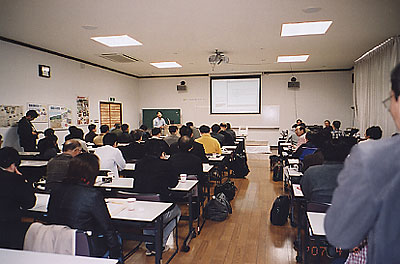 
April 6
There was the Comet Conference in Niigata prefecture and I arrived in Niigata City on April 6, the day before the conference. The reason for my earlier arrival was that I wanted to see the monument dedicated to "Sunayama" (Sandhill), a famous poem written by Hakushu Kitahara, Japan's foremost poet.

Mr. Kei Okamoto, our homeroom teacher, taught us the song "Sunayama" when I was in 4th grade. In his music class he said, "I will teach you the song I love most. I always sing this song when I feel lonely" and sang it for us playing the piano.


"Over the churning seas lies Sadogashima Island.
Chirp, sparrows, it's becoming dark.
Call out to everybody, you can see a star."


It is simple and beautiful. Hakushu in his early days wrote this poem after visiting a beach when he was invited to give a lecture at a teacher's college in Niigata City.

Mr. Kei Okamoto was an expert on insects and in his science class told us painstakingly about the excitement of searching in nature for a new species. I believe I became interested in nature and then fond of the stars thanks to Mr. Okamoto. Having Mr. Okamoto as a teacher was pivotal in my early childhood. He excelled not only in science and music, but also was quite athletic. He was the admiration of us students.

Our peaceful school life did not last long. We were in the midst of the Sino-Japanese War (1937-1945) and on the even of the breakout of the Pacific War. Mr. Okamoto was drafted and sent to China. Students and others looked after Mr. Okamoto as he walked through the school gate and disappeared. His figure with the back toward us is still deeply etched in my memory more than half a century later. Mr. Okamoto encouraged me and inspired me, although I was a failure as a student. Sadly, we have never heard of him since.

I wanted to visit the sea which had inspired Hakushu into writing "Sunayama", Mr. Okamoto's favorite song. Did Hakushu see the sea under a clear sky or an overcast sky? There was no sign of the sandhill there. Only raging waves were routinely striking against the awkward-looking breakwater and the mountains on Sadogashima Island were seen vaguely in the far distance through haze.

"Mr. Okamoto!" I shouted loudly and strongly in my mind toward the sea. The nightfall was rapidly approaching and only the sound of breaking waves was heard as if lasting forever. 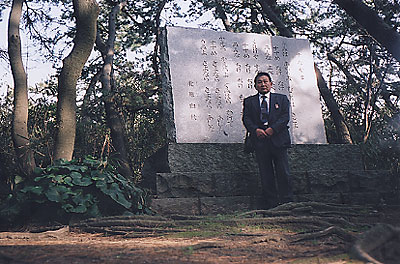 Posing in front of the monument of "Sunayama"