December 15
There is a villa at 1400-meter-high Kajigamori mountain. It has an observatory equipped with a 60cm reflector. On December 15 I appeared on a TV program which was broadcast from this site by NHK Kochi television station. Kajigamori sits in the midst of untouched nature and enjoys beautiful starry skies free of light pollution. Near the summit there is abundant pristine spring water.

It was a warm day, but at night the temperature dropped to below 1 degree C. The sky miraculously cleared up and awesome starry skies spread overhead. But until then the weather had been so awful that I was not expecting to be able to do any observing. A super-high-sensitivity camera brought over from NHK Tokyo station broadcast views of the winter starry sky to hundreds of thousands of homes. The Pleiades appeared surprisingly bright on the monitor; as bright as seen in binoculars. The stars were shining brightly through the dome slit against the dark and infinitely transparent background. This observatory's 60cm reflector would be able to capture even 20th-magnitude stars. The sky around Taurus looked faintly glowing along the zodiac. It could be the glow of the same nature as the zodiacal light seen in pre-dawn autumn skies. When I was at a viewing session of the Leonid meteor shower at Kajigamori about 10 years ago, gegenschein (counterglow), normally visible at the zenith at midnight, was already faintly glowing in the eastern sky in the early evening. This will show how dark Kajigamori's skies are, as the brightness of Gegenschein is a fraction of the faintest part of the Milky Way. Incidentally, a professor from Kochi University of Technology was operating the observatory's telescope that night.

If I lived closer to Kajigamori, I could observe there frequently. But at present it takes me 2 hours one way to get there and the narrow road to the summit is not easy to negotiate. This observatory is owned by Otoyo town and the accommodations run by the town were quite comfortable. The sunrise and a sea of clouds over Yoshinogawa River below are spectacular.

I was around 20 years old when I first climbed this mountain. There was no road leading to the summit then. I got off the train at Toyonaga station and walked as long as 4 hours. I stayed overnight at an old temple on my way to the summit and resumed trekking at 3 o'clock in the morning on the following day. At the same temple Mr. Tokihisa and his son were staying and we climbed the mountain together. Mr. Tokihisa was teaching at Yamada Senior High School. Ten years later I discovered my first comet and Mr. Tokihisa, remembering our encounter at Kajigamori, sent me a letter of congratulations. We tend to remember people we met at the mountains.

December 9
It was a clear early winter day today. I drove toward beautiful Katsurahama beach wanting to see the grave of Ichiryo-gusoku. Ichiryo-gusoku were faithful subjects of the feudal lord of Chosakabe Motochika, who ruled Shikoku (Kochi) during the Warring States period (the mid-15th century to early 17th century). The sea along Tosa was bright and magnificent even in winter. Ichiryo-gusoku's grave was near the ruins of Urato Castle overlooking the Pacific Ocean. They were militia who fought for Chosokabe Motochica. They were engaged in farming during peace time, but once a war broke out they took up weapons for their lord.

After the battle of Sekigahara (the 17th century), Chosakabe Motochika was defeated by Toyotomi's forces and ordered to leave his Urato Castle. The Chosokabe militia swearing allegiance to their lord rebelled against Toyotomi, but more than 200 of them were murdered by a surprise attack at Tanegasakinohama beach. This beach is also called Sensho Koen (Sensho park) and beautiful with numerous pine trees growing thickly. I camped in this area in summer when I was at elementary school and enjoyed swimming. Tanegasaki is only a short drive from Katsurahama crossing Urato-Ohashi bridge.

I wonder what the weather was like on the day the fighters were killed. Four hundred years later today, breezes, like the ones on that fateful day, came over the beach bringing with them the sound of crushing waves in which, I felt, the screaming of the murdered fighters was heard.

Against the clear sky Urato-Ohashi bridge formed a large rainbow-like arch from Tanegasaki to Katsurahama. I remember that when a Comet Conference was held at Katsurahama around 1972 the bridge was still unfinished with two parts of the bridge just about to meet at the middle. The conference was held at the site of Urato Castle, where Lord Chosokabe Motochika had resided. 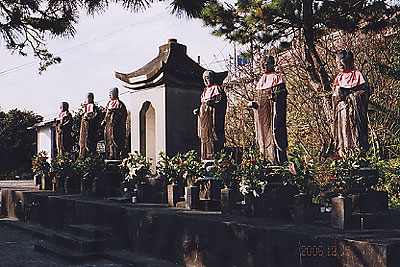 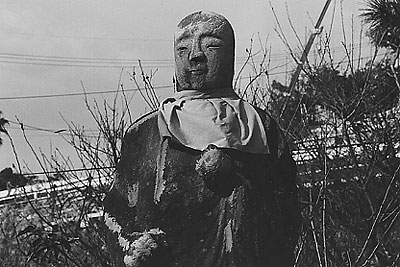