November 27
A minor planet was named after Mr. Hiroshi Kanai, who is the former president of Minox Club and miniature camera enthusiast. (Refer to the list of the minor planets discovered by Seki.) Mr. Kanai is a photographer born in 1915 in Tokyo and an expert on Minox cameras. "Minox" itself is a minor planet (6995) now. For many years he has photographed mostly with Minox cameras and created numerous masterpieces. He is already over 90, but still actively pursuing his interest in photography.

I met him at a photographic session in Kyoto this May. I was fortunate enough to have an opportunity to talk with him as both of us were staying at the same hotel. My association with miniature cameras started when I saw a midget camera in a classmate's good-looking red wallet. I was an elementary school pupil in pre-war Japan. 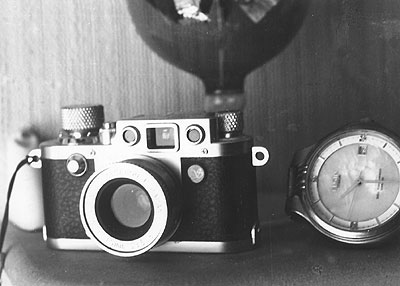 I used to take 12 exposures using 18 millimeter-wide film backed with paper lining. The camera had only two shutter settings, 1/25 and B, with fixed focus and set aperture stops, but the results were reasonably good. Around that time I became mad about miniature cameras, but it was very difficult to get hold of cameras and films as it was on the eve of the Pacific War. I was impressed with a scene in a film titled "Anatawa Nerawareteiru" (or you are marked) where the main character was trying hard to obtain film for his spy camera. Wanting to buy a miniature camera, I was looking around the black market in the rundown area of the city. I found a Guzzi camera beside old military boots. I got the camera by begging my mother. I was never happier in my life. So excited, I took photos of my mother and classmates one after another. While doing this, I inadvertently took very precious photos. On the school excursion to Kyoto I photographed Omi-ya before it was dismantled. Omi-ya was the soy-sauce store where Ryoma Sakamoto was ambushed. With the breakout of the war, it became much harder to get films, but I managed to take a photo of the bomb shelter dug in our courtyard. This photo is the only record I have to tell the miseries of the war. 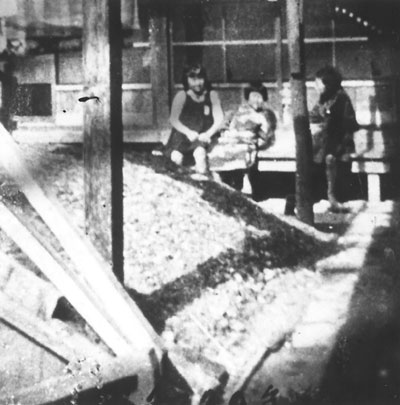 
Right over this bomb shelter I built an observing platform after the war. This was exactly where we were watching enemy planes in fear. Also, this was where I searched for comets and discovered them in peacetime. Miniature cameras in my possession are my personal history itself. I have a fond memory that I was mistaken for a spy and had my camera confiscated by the special police, while taking a bird's-eye view of Kochi city from an elevated place. In those days it was prohibited to photograph a view of the city from a higher ground, even if you were not a spy.

Minor planet Murikabushi was born. The minor planet 13989 was discovered at Geisei on January 16, 1993. The name Murikabushi was proposed and the Minor Planet Center of IAU (International Astronomical Union) has recently approved it. Murikabushi means a "swarm of stars" in an Okinawan dialect and the recently completed 105cm reflector at Ishigakijima Astronomical Observatory in Okinawa Prefecture is nicknamed Murikabushi.

I hope that Murikabushi telescope captures this star shining over Okinawa and it gives hopes to the people of Ishigakijima who love this observatory. I haven't been to Okinawa yet, but someday I would like to visit Ishigakijima myself.