April 30
Nuclei B and C of Schwasmann-Wachmann 3 compete over brightness.

I came to the observatory, though the sky was hazy again today. Was it caused by the "yellow sand" or mist? The outline of the mountains about 5 kilometers away could not be distinguished from the sky. Against such conditions, I managed to observe.

As reported earlier in Mr. Syogo Utsunomiya's email, the appearance of nucleus B of Schwasmann-Wachmann 3 has changed. It had showed an elongated, sharp nucleus with a very diffused coma and eventually broken up resulting in a number of small stellar nuclei. I thought it would disappear in the end, but as if to show its tenacity for survival, its round coma was shining defiantly. At 1.30 am when it rose to the zenith, it was at 7.9 magnitude by my visual estimate through the 20cm refractor at 60x. Nucleus C was 8.1 magnitude, 0.2 magnitude fainter than nucleus B. These two nuclei looked competing with each other for superiority in brightness and, tonight, nucleus B became slightly brighter than nucleus C again. Interestingly, it seemed to have occurred around the time of this observation. Generally, nucleus C has a very sharp, pointed coma, unlike fuzzy nucleus B's coma, and even now maintains its characteristic appearance. The comet was in Hercules that night. The star shining near the comet was 3rd magnitude Zeta Her. I wanted the comet to reach a similar magnitude to that of Zeta Her, but was not able to see it in my handheld binoculars probably because it was overshadowed by Zeta's brightness. It will become 5th or 6th magnitude at the brightest in mid May, if it continues its trend.

I photographed this comet in color that night. It will be shown in later Reports from Geisei Observatory.

We have been troubled by the "yellow sand" dust haze at Geisei Observatory recently. We have hardly had any days we can see the stars clearly. Poor weather conditions make Antares in Scorpius barely visible to the naked eye.

In the meantime Mr. Keichiro Okamura, the observatory's staff member, completed a miniature model of William Herschel's massive reflecting telescope. It is a 1/20th model, he says, but a faithful reproduction of the telescope. William Herschel ventured into the world of the stars having his sister Caroline as an assistant in spite of inhospitable weather conditions in England. On cold winter nights, Caroline's note-taking pen froze, but she discovered more than 6 comets by herself.

In March I visited a farm in Iwate prefecture, where I saw a reproduction of Hevelius's air telescope. It was a real working telescope rather than just a model. The objective lens was 10cm f/100 having an extremely long focal length and had been specially ground for it. It turned out to be a great hit with visitors.

The mirror next to Herschel's telescope in the photograph below is the one ground by Kojima, Japan's renowned mirror maker, and was installed in my 40cm f/5 reflector. The telescope had been actively used until the completion of the present 60cm reflector. Although the 40cm reflector was entirely home-built, it was a very effective telescope. It first captured on film a bright nova in Cygnus around 1975, then rediscovered Comet Tuttle-Giacobini-Kresak, currently on its way to perihelion, and recovered a number of periodic comets. However, I had a great difficulty in achieving accurate focusing because the mirror was made of plate glass. The problem was made worse especially by the poor performance of N company's mounting. 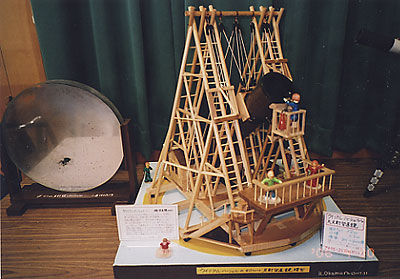 
April 17
A new development to 73P-B/Schwassmann-Wachmann 3

I read an article in "A" Newspaper about "yellow sand" dust haze from Mongolia having invaded the sky over the city of Shanghai on April 16. The sky here was blue and clear that day, but one day later on April 17, the "yellow sand" seemed to have reached Japan. It suddenly became hazy all over the sky in the evening as if covered by a sheet of thin clouds. From Geisei Observatory the feeble light of the setting sun hanging over the mountains in the west looked like a daytime full moon. The arrival of this quite unseasonal "yellow sand" was probably caused by the persisting wintry weather pattern. This condition continued into the night and first-magnitude stars were shining weakly. The only blessing that night was exceptional seeing. The guide star appeared as sharp as a pinpoint and did not shimmer at all. It would be perfect for observing the planets.

The future development of Schwassmann-Wachmann 3 is intriguing. Nucleus B has been brighter than the main nucleus C, but was observed tonight to be about 0.5 magnitude fainter. It, too, seemed to begin breaking up. Nucleus C was seen clearly at 8.3 magnitude through the 20cm refractor, but Nucleus B was faint 8.8 magnitude. Its nucleus showed a long narrow extension in the direction of its motion. It was very difficult to observe and might be in the process of breaking up. A faint and extensive haze appeared to envelop the coma. It began to diffuse without any central condensation. The photographs below show Nuclei B and C taken under the almost same conditions. Look at the round, strong coma of Nucleus C. 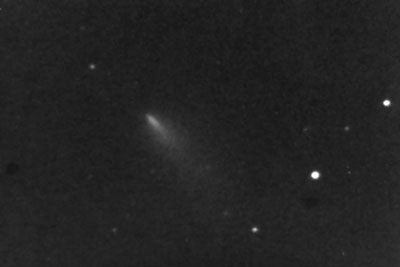 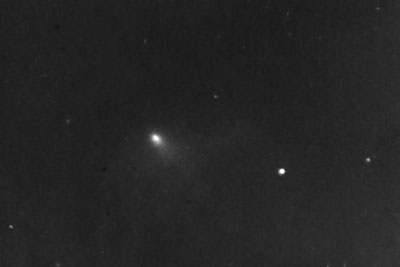 
Mr. Okamura, an observatory staff member, and I removed the nest of sparrows from the slit shutter some time ago and we can now close it electrically. Relieved at the successful repair, I looked up and found two sparrows flying over swiftly into the sleeve of the shutter. An old saying came to mind: "Gonbe sow the seeds and crows dig them up (All the sweat and toil is wasted)." I just had to laugh at myself.

Cherry blossoms are in full bloom now. I can recall a few occasions when I saw extraordinarily beautiful cherry blossoms. I think it was about 20 years ago and it was March. When I was traveling in the Chugoku region, I saw a sea of cherry blossoms near my hotel in Tokuyama City. It was unforgettably beautiful.

I remember that, when I was a small boy, I went to Kochi Park with my mother for night-time cherry blossom viewing. The sakura festival (cherry blossom festival) was going on at a small hill called Suberiyama near Kochi Castle. I vaguely remember that I saw people dancing under numerous red lanterns. On our way back my mother and I walked hand in hand along a narrow road at the foot of a dark thick forest. On one side of the road a white fence of a prison continued endlessly. There was no sign of movement in total darkness. I heard a loud chorus of chirping insects in the frightening darkness and silence. They seemed to be insects called "kubikirigisu" (similar to katydids) singing in the narrow gutter on the roadside. I cannot forget the powerlessness and fear I had felt that night. "Kubikirigisu" would sing during March and early April and are not often seen. I have visited the same area recently, but could not hear their singing at all.

We have a place famous for cherry blossoms, not far from our home. Long lines of cherry trees are flowering around this time of year along the banks of Kagamigawa River. It was so beautiful I could not resist taking a few shots with my Minox camera (not a cell phone camera!). 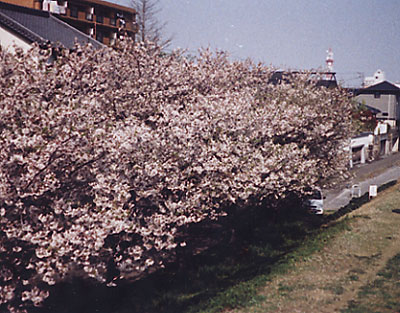