February 24
This is a quiet and pleasant time with flowers blossoming at various places, though it is not at the peak of the springtime flowering season yet. I walked about 7 kilometers to the west to visit a barbershop at Tsukanohara today. It was good exercise and I got there earlier than expected. I used to ride a bicycle over a distance of 37 kilometers to Geisei spending 3 hours one way. Perhaps I should even try to walk there next time.

While walking through the old section of the town, you sometimes find yourself lost in a maze of alleys and come upon unusual, unfamiliar scenes. I was admiring a delicate white flower growing in the garden of a house near a reservoir at Asahi-Tenjincho, where I remember I went on an elementary school outing. Then, I heard someone playing Bach's famous Fugue in Partia for Violin. Like the famous Jaconne, it was the ultimate "music of my dream" . I thought it was extremely difficult music and wondered who in the world was playing it in this old desolate residential area. Would it be a person like Anton Karas, an unknown guitarist who composed all the music for the movie "The Third Man"? Would a person like him be living in this downtown area unnoticed? Even if he is not an internationally renowned performer like A. Segovia, it would be nice to think that he could be a yet-unknown master guitarist living here. There may be many able and talented people in this world who remain undiscovered.

The weather has been bad and with the approach of spring Kochi will be plagued by cloudy weather. C/2006 A1 (Pojmanski) appears in the morning skies, but large telescopes housed in a dome cannot be turned to very low altitudes. It is limited by the height of the track of the dome. In the past the Dodaira and Kiso Observatories of the University of Tokyo were not able to observe objects below 10 to 15 degrees above the horizon. At Geisei Observatory the telescope can be lowered to as low as 5 degrees above the horizon, but the sluing motor will be automatically switched off if it exceeds the limit. After all, professional astronomers would not observe very low altitude objects because they cannot obtain accurate measurements. As for C/2006 A1, I can afford to wait for it to rise a little higher as its orbit is becoming more reliable.

Nucleus C of 73P/Schwassmann-Wachmann 3 seemed to have brightened a little (14.5 magnitude) when observed on February 24 and its tail has definitely grown. The other nuclei seem to be still very faint.

February 10
I went to Sakawacho town to give a talk to a class of "the university of longevity" (the University of the 3rd Age). The number of the elderly over 65 has increased and there are so many organizations in the prefecture for providing lifelong learning. Their lectures tend to be planned close to the end of the fiscal year. In fact, there are three lectures scheduled in February. Interestingly, there are definitely more women in those lectures. Usually there are about 100 participants at each meeting and no more than 10% of them are men. Mostly women ask questions, too.

On my way home I stopped by a community hall and found an altazimuth telescope in the storage which was a copy of the 20cm comet seeker used by Mr. Masamitsu Yamasaki. In fact, Sakawacho is the hometown of Mr. Yamasaki, the first comet discoverer in Japan. From the small hill where the community hall stands I was able to see the area through a haze where his home is. It used to be a rural town where the stars were beautiful in the night sky. However, over the years many houses have been built and a haze caused by dust and smoke covered the area as well as the foot of the mountains. The aforementioned telescope was made by members of Yamasaki Memorial Observatory, but I wonder if the organization still exists. A staff member of the community hall told me that the observatory would be opened to the public on request. I guess the activity of the observatory has declined for years since the return of Halley's Comet. Observatories tend to decline without able observers.

In the community hall there were the posters in display of the great historical figures this town had produced: the novelist Uson Morishita, opera singer Keisuke Shimoyakawa, botanist Tomitaro Makino, and heroes of the Meiji Restoration, statesmen, and so on. However, I could not find a photograph of Mr. Yamasaki anywhere. Mr. Yamasaki conducted research on the earth's latitudinal shifts under the guidance of Dr. Hisashi Kimura at Mizusawa Latitude Observatory (the present Mizusawa Astrogeodynamics Observatory) in the 1920s. Around that time he built a unique 20cm comet seeker rather secretively. The observatory buildings seem to be still standing. I would like to visit the place someday.

February 1
I strolled along the streets under soft light of early spring. Kochi experiences very cold days occasionally in winter but spring comes early. Temperatures are still low, but you can already feel early spring in the sunshine.

While walking through Obiyamachi, the city's most lively district, I came across the stately gate of a residence which would remind you of a daimyo's (or feudal lord's) mansion. The huge name plate on this ancient gate reads "Goto". From where I stood, I was able to see the castle of Kazutoyo Yamauchi, the ruler of Tosa (Kochi), overlooking the town.

There is a famous anecdote about Kazutoyo and Goto. When Kazutoyo was wounded by an enemy's arrow in the battlefield, one of his subjects called Goto assisted him. The arrowhead and the thongs worn by Goto are preserved at the History and Folk Culture Museum at Aki City. This building in front me was the residence of Goto's descendents. There were long earthen walls there before, but they were dismantled. Now a bookstore stands where the walls were. But inside the gate the atmosphere of feudal days seemed to be preserved with a tranquil landscaped mound.

Mr. Seizo Goto, who donated Geisei's 60cm reflector to Kochi Prefecture, was born in Aki City and a member of a branch family of the Gotos. The old house where he was born is preserved in a park in Aki City. I feel as if it was just yesterday that Mr. Goto and I walked in this neighborhood looking for a suitable site for a new observatory. I continue to treasure the 60cm reflector not to waste his generosity. Among the numerous astronomical facilities Mr. Goto had donated to Kochi Prefecture, which is his hometown, Geisei Observatory is the only one actively used. 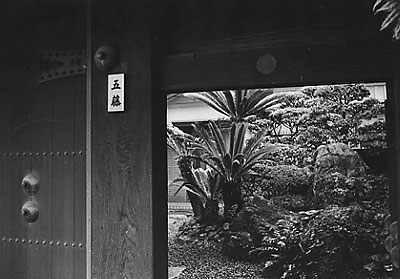 The front gate of the Goto residence 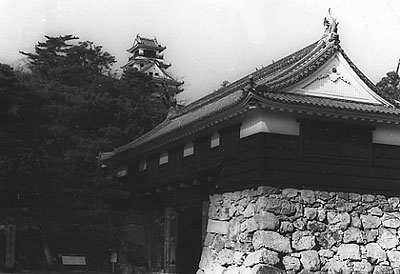 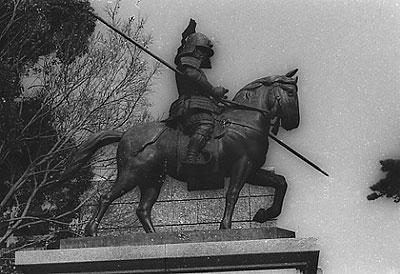 A statue of Kazutoyo Yamauchi at a battle field