• June 30
This is the festival day for Wanuke Shinto God. There is a jinx on this day, as it always rains. I remember that in the past 30 years it hasn't rained only a few times on the festival day. But today (the festival day) there has been some clear patches in the sky and it hasn't rained at all. I almost thought of going to the observatory, as it turned out to be a beautiful starry evening.
When I passed by the front of the shrine, I saw a large group of pretty children in red kimono under the torii gate. There were also tent stalls. I like evening festivals. When young, I used to go to the shrine wearing summer kimono. The air along the narrow passage to the shrine was filled with a strong smell of gas lamps and stuffiness created by the crowds. On the floors of stalls lit by blue gas lamps there were wooden water basins for a goldfish scooping game. Children's toys, too, were spread out on the floors. Under the eaves of the stalls were hung many revolving lanterns projecting dim dream-like images creating the air of fantasy. Occasionally-heard loud energetic voices and applauds might be from the sumo wrestling contest at the shrine's sumo ring. The shrine and surrounding forests were well lit and lively throughout the night.
A friend of mine living in Tokyo bought a telescope-making kit at a stall of a night festival. This experience stirred his interest in astronomy and he became an amateur astronomer. Visiting night festivals used to be quite interesting, as you would always come across unusual articles, which you would not normally see. However, since about 20 years ago, revolving lanterns, typical of night stall displays, have disappeared, familiar gas lamps have been replaced by incandescent lights, energetic sumo matches have ceased to exist, and tent stalls have been displaying just ordinary things that you can buy anywhere.
I used to go into a spine-chilling haunted house wearing summer kimono with a fan in hand. It is now a fading distant memory of my childhood. I fondly reminisce about the festival nights when I heard the sounds of flutes and drums from a distant shrine until late at night.
Every year toward the end of summer, the distant sounds of flutes and drums are sometimes heard at the observatory. It must be from the festival at a shrine somewhere. They can be heard even past midnight. Even now, festivals in the countryside seem to be celebrated in the same way as they have for many many years.

• June 28
There has been no rain at all recently. Weather satellite images show the clouds off Shikoku caused by a rain front have weakened and dissipated almost unnoticed. Instead, the front generated the clouds in the north, ushering in the rainy season to the Tohoku region. This weather pattern brings moist air from the south into our region making the weather over Shikoku often unstable. However, we have a clear starry night tonight with the magnificent Milky Way over Geisei Observatory. Judging from weather charts, a drought in western Japan will continue. If the rainy season ends this way, it will be an extremely short rainy season. Water shortages will be really worrying.
Around August 1955 we experienced water shortages due to lack of rain. Even the mayor joined in the prayer for rain at Nanatsubuchi Shrine in Kitayama. The mayor explained: "It's not that I am superstitious, but I just can't ignore this critical situation." As soon as I returned home from the prayer, we heard a loud thunder and a downpour followed. Is it a mere coincidence?
We observed Tempel 1 prior to the rocket's impact on the comet. The last observation of this comet was made a while ago. The total magnitude was 11.9 and the coma's diameter was 2'. In spite of its becoming closer to perihelion, it has faded. It is at the limit of the 20cm telescope's capacity. The coma of Comet Machholz has also faded and is now invisible.
Yesterday (June 27) Mr. and Mrs. Ichiro Hasegawa, the president of OAA, visited Kochi City. Five of us living in Kochi gave them a dinner party. The photographs below are some of the shots of the party taken by Mr. Shigeo Shimomoto using his cell phone. 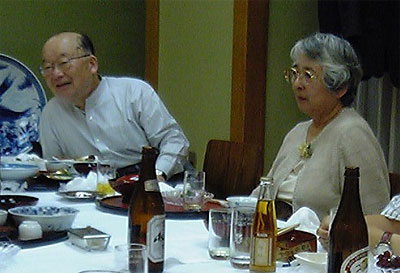 A closeup of Mr. and Mrs. Hasegawa


• June 27
We are supposed to be in the middle of the rainy season, but have had little rain so far. The rainless rainy season, so to speak. I remember that I have experienced this sort of weather about three times since the end of the last war. However, June without rain is beautiful and pleasant. During the rainy season, we wouldn't usually view the surroundings, as the rainy weather makes us stay indoors more often. On clear days in June the lush green vegetation is refreshingly bright and the water of Kagamigawa River is shining pale blue reflecting the blue sky above. Such June days are as pleasant as May, when all the plants start growing with fresh green leaves. It would be great if it brought us fine starry nights, but more often clouds drift over in the evening and move away unnoticed in the morning.

The view of Kagamigawa River running through the middle of Kochi City is beautiful reflecting Mt. Hitsuzan. Kagamigawa River or the River of Mirror does not mean "a river as clear as a mirror. " The name comes from the appearance of the river upstream. It makes a loop resembling the shape of an ancient hand-held mirror. We used to play by the river and practiced swimming during P.E. classes in elementary school.


Over the churning seas lies Sadogashima Island.
Chirp, sparrows, it's becoming dark.
Call out to everybody, you can see a star.

When I was a little child, I would walk about 300 meters to play on the shore of the river. Around the time when the first star appeared in the twilight sky, my worried parents would come to take me home. This was also the river our family escaped to during the terrible air-raids on July 4, 1945.

Bansui Doi, another famous Japanese lyricist, wrote the school song of my junior high school. It marvels at the beauty of the natural environment around Kagamigawa River.


With Mt. Hitsuzan and Kyuko nearby
Our school is blessed with the beauty of nature.


• June 19
The general meeting of Astronomical Society of Shikoku was held at Geisei Observatory, Kochi, on June 19. The Society is having the 20th anniversary this year. The number of attendees was smaller than expected, but the founder of the Society, Mr. Yoshihiro Yamada, rushed over from Kobe to attend it. The meeting ended successfully.
At the end of the meeting I gave the commemorative lecture titled "40 years since the discovery of Comet Ikeya-Seki." There was also a tour of the observatory. The 19th of this month is the day when Comet Ikeya-Seki was discovered and it is Sunday too just like the discovery day. I talked about the discovery of the comet with the 9cm comet seeker in my hand, which I had used to discover it. We discussed Comet Denning-Fujikawa, which is now approaching perihelion. Mr. Kenji Muraoka, who specializes in orbital calculation, told us about the difficulty in determining this comet's orbit. After the meeting, some of the attendees drove 40 km west to my home and enjoyed conversation until late. Nakagawa Observatory and Geisei Observatory are associated with the Society and we look forward to their future observational activities.
Astropia, the Society's newsletter, carried in its inaugural edition a story and photographs related to Japan's first sighting of Halley's Comet by Geisei Observatory in 1984. There was also a feature story about our first visit to Subaru Telescope on Hawaii. To commemorate the Society's 20th anniversary, these articles will be put together in one special edition. I look forward to its publication. 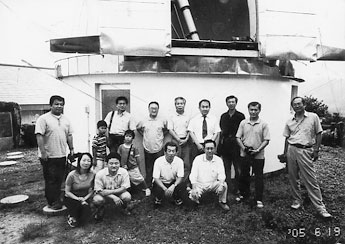 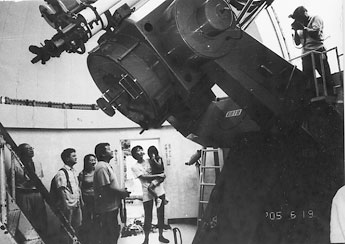 A tour of Geisei Observatory

• June 9
Today we had the last clear weather before the rainy season begins. A little before midnight, the magnificent Milky Way stretched over the Pacific Ocean in the south while an approaching typhoon brought in some clouds. Looking at the Milky Way that night, I remembered the awesome Milky Way I saw at Mauna Kea. It was so bright that you might think that a full moon was placed in the middle of it. The glow of the Milky Way looked flooding the town of Tanocho next to Cape Muroto with its silvery light. At the summit of Mauna Kea we moved around relying on the light from the Milky Way. The Milky Way over Geisei impressed me deeply. In spite of increasing lights around the observatory, we still can see the stunningly beautiful Milky Way. The photograph below is the Milky Way taken in black and white, though I don't take monochrome photos often these days. 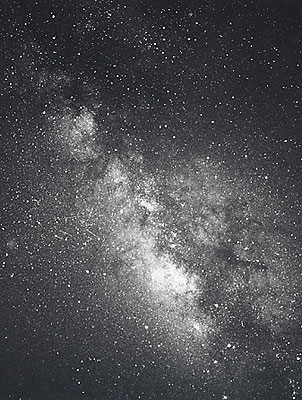 The Milky Way over Geisei before the onset of the rainy season
5-minute exposure, 28mm f/2.8 on TX400 film

• June 3
Good weather continues prior to the beginning of the rainy season. I headed for the observatory later than usual. Recently many faint comets have been discovered by automatic patrol programs, so many, in fact, that observing each of them takes most of my time at the observatory.
Mr. McNaught has been doing outstanding work from the southern hemisphere. About 5 years ago, Mr. Akira Kawazoe of our observatory visited Perth in Australia and met Mr. Candy (BAA) and Mr. McNaught. He kindly brought me back a message from Mr. McNaught. Mr. McNaught named one of his minor planets after Mr. Minoru Honda. I had the same idea but he beat me to it. Instead, I gave Mrs. Honda's name Satoru to a minor planet I had discovered. Mr. Kawazoe was surprised to learn that both gentlemen had quite good knowledge of me.
Speaking of Mr. Honda, he had discovered Comet Honda-Bernasconi in Perseus on June 3. Keeping his discovery in mind, I concentrated on search for 30 minutes until the daybreak. The comet was 4.5 magnitude when discovered and reported to have been found by the naked eye. When the Double Cluster in Perseus drifted into the field, its beauty took my breath away. I was spellbound and held onto the field for a few moments. Chances for failing to find Mr. Honda's comet that night might have been more than 99%, but you would get satisfaction and pleasure from search. It had been quite a while since I last saw the twilight feeling content and happy after finishing the night's search. I stared into the area where Comet Denning-Fujikawa, on its return to the morning sky after 9 years, was supposed to be shining. This comet rarely makes its presence visible, just like Comet Perrine-Mrkos. I cannot turn the 60cm telescope to that part of the sky yet, as the forest in the east blocks it.