• April 13
Yesterday Mr.Shigeo Shimomoto came to our place and we thoroughly enjoyed conversation.
The names of Mr.Eiji Kato in Australia and Mr. Shimomoto, who provide great support for the running of this homepage, were given to the following minor planets discovered at Geisei. The names had been proposed to IAU (International Astronomical Union). Congratulations to both of them.     The photograph below was taken in the year when the minor planet Eijikato was discovered in 1991. By making a double exposure (by exposing once and then making another exposure with the telescope moved slightly to the north) a moving astronomical object in the solar system can be identified easily. (A minor planet shows a diagonal motion unlike the stars.) Comets are searched for in the same method. Geisei has detected about 1500 minor planets since 1982, 222 of which have been confirmed and each is given a number. We still continue to patrol the sky, but most bright minor planets have already been discovered. Our chance of discovery, though very slim, will be limited to those fainter than 18th magnitude.
These two objects will approach the earth in summer at opposition and will be interesting targets even for a small camera with their magnitudes being slightly fainter than 16. 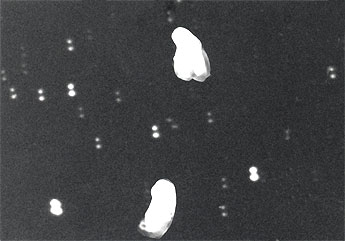