• January 16
Comet Machholz has faded to about 4.5 magnitude, but the coma is bright and clearly visible to the naked eye. 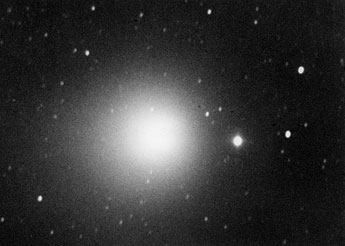 • January 7
The 21cm Epsilon f/3.0 telescope captured Machholz moving north near the Pleiades. This photograph was taken by an 8-minute exposure from 19:00 (J.S.T.) on January 7. Type 1 tail is faint but emits blue light similar to the glow of the Pleiades. 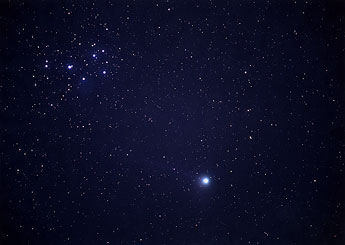 
• January 3
Good weather has prevailed over the year-end and New Year period and I have been making good progress with my observation.
For observation of Comet Machholz Geisei's main telescope 60cm reflector as well as 21cm and 16cm Epsilon telescopes have been effectively deployed. In the 60cm scope the large greenish coma was impressive (photograph 1), though its short tail looked no more than a short fuse for an explosive. However, long exposures by the small f-ratios of Epsilon telescopes make two magnificent tails visible (photograph 2) . The blue ion tail in the opposite direction from the sun makes a striking contrast with a reddish dust tail which looked pushing forward against the sun's force. Overall, this comet has very faint tails.
The comet was at 3.2 magnitude and bright on January 2nd, but binoculars may be better as its coma is relatively small.
The starry sky on the night of January 1st as seen from my home at Kamimachi was breathtaking and the comet was easily visible to the naked eye. Yes, this site is where I discovered six comets including 1961f (Comet Seki). On the first day of the new year the stunningly beautiful starry skies of those days were recreated.
Many of the new year's greeting cards I received incorporated images of Comet Machholz or local landscapes, a source of pride for the senders. I found a very peculiar card among them. The sender was Mr. Mitsuyoshi Kodama who works for Goto Optical Company. On the card there was a color photograph of two of the volumes (Orbit Determination and Theory of Errors) of Gauss's complete collection, which were published from the end of the 19th century to the early 20th century. Mr. Masamitsu Yamasaki, who had studied in America for many years, gave me a book called "Manual of Astronomy." The book was said to be written by Young, an American astronomer. It was leather-bound and quite sturdy. Gauss's books are quite similar to it in design. How did Mr. Kodama manage to get hold of such rare and valuable books? I recall that he was a comet hunter when young and wrote me frequently.
Gauss is well known for his unique orbital calculation of Ceres, when this first minor planet was discovered from Sicily Island at the beginning of the 1900s. His method of orbital calculations slightly modified by Merton of the U.K. and others had been widely used for many years until the introduction of personal computers. When I first started orbital calculations around 1955, I was dumbfounded by running into Gauss's quardratic equations totally unprepared, which was to work out an approximation of the distance to an astronomical object in the course of determining the orbit of a minor planet. There was no textbook available to help me and I struggled to find solutions by myself and continued calculating.
Generally there are four solutions in a quardratic equation, but actually only two appeared on a graph. I often got incorrect values and my calculated orbits turned out to be incredibly wrong.
With the photograph of Gauss's theoretical books staring at me, I vividly remember that I visited Mr. Ichiro Hasegawa (see the photograph in the diary dated December 5, 2004) at Suma while I was engaged in orbit calculations. It was time when you could calculate all by yourself the orbit of the comet you had discovered. It was time when such an aspiration was fulfilled.