January 2, 2011
This is the first diary entry this year. The last year we sadly experienced a number of deaths around us: Dr. Marsden, the "grand old man" of the Smithsonian's Minor Planet Center, Mr. Masaki Morimoto, a well-known retired astronomer, and closer home, Mr. Kenji Muraoka. As for Mr. Morimoto, I just saw him in July last year at Himeji Science Museum. As the new year has started, I have resolved that, grateful for the contributions to astronomy made by these people, I shall work hard with a renewed enthusiasm overcoming the sadness.
Since the end of the year, I have often been forced to rest because of the winter cold and less-than-perfect physical conditions, but today I got myself "psyched up" to take a leisurely stroll in the neighborhood. The photograph shows Kagamigawa River, which is renowned for its pristine water, second only to Shimantogawa and Niyodogawa rivers. Ryoma Sakamoto living not far from the river is said to have walked from home to Kagamigawa to swim wearing only his loincloth. When I was a child, my father took me to the river and taught me how to swim. During the physical education classes at elementary school, we often went to the river for swimming lessons. There was no public swimming pools in those days. Past famous Olympic swimmers such as Kusuo Kitamura and Hideko Maehata are said to have practiced in rivers even in winter.
Today the skies over the distant mountains appear bluish and bright because of transparent. The mountain seen right above the river (slightly off the center of the photo) is Hitsuzan mountain famous for "the moon over Hitsuzan". The scene with the rising full moon over this mountain is reminiscent of the moon over Lushan in China depicted in paintings. I enjoyed a walk for about 5 kilometers in a warm afternoon, which was in sharp contrast with a cold day yesterday. 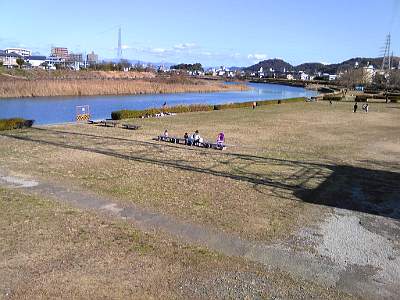