July 31, 2010
I have talked about "gekka-bijin" (a beauty under moonlight) in my diary before.
This gekka-bijin is in a pot placed in our garden. As soon as the buds began swelling, four of them suddenly came to full bloom altogether at midnight. Previously when it flowered, a 13-day-old beautiful moon was brightly shining. Tonight, too, there should be a bright moon somewhere in the sky, but it is not visible perhaps because of the clouds.
The flowers had been in bloom for only 5 hours from 23.00 and faded in the morning when the sun shone. It quietly opens beautiful flowers at night while nobody is watching. What a beautiful "heart" it has unlike many of us who want to be the center of attention. Watching gekka-bijin flowers, I thought we should do good to others even when people are not watching. It will make the world a much more pleasant place.
The flowers are pure white as if showing its pure heart. The monochrome film brings out its best here. 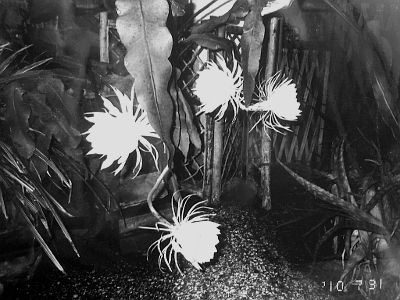 Gekka-bijin blooming in our garden


July 25, 2010
Just about 10 years ago, when I heard a friend from my elementary school days was hospitalized, I went to visit him at the general hospital in Kamimachi. When I walked into the light-filled modern-looking lobby, an old frame hanging scroll on the wall caught my eye. The title of this calligraphic writing was "the ten commandments for good health". It was about proper diet and upkeep of good physical conditions. What surprised me was it seems that popular modern concerns about health had been discussed nearly a century ago. Its author's name "Seppo" surprised me more. Seppo was a pen name used by my uncle Kindo (my mother's brother). This is the man who attempted to do things well ahead of his time and startled the world of Taisho period.
My uncle Kindo was a calligrapher. He had studied under Hosui Matsumoto and Oun Kwatani and devoted his life to the art of calligraphy since his youth. He established Hitsurinkai School of calligraphy and attracted members from all over Japan. He also published the School's newsletter "Hitsurin" and the School was at its height of popularity from Taisho to early Showa. People even came from distant places such as Hokkaido and Kyushu to study at the school. However, he died at 36 in 1933 from tuberculosis which he had chronically suffered since his younger days. I was three years old at that time and cannot remember anything about him. Strangely, not a single work of his calligraphy had been handed down to us. The scroll I saw at the hospital was truly my first encounter with his works.
I believe there is an unknown reason for the modern hospital to hang the ancient scroll at the lobby. Was there a particular relationship between the hospital's first director Mr. Kuniyoshi and my uncle Kindo? My uncle was extremely interested in music, wireless, and gramophones during Taisho period and invented a few things. There was nothing related to astronomy, though. He must have seen Halley's Comet at the age of 8 when it appeared in 1910, but nothing about astronomy was found among numerous things he had left. 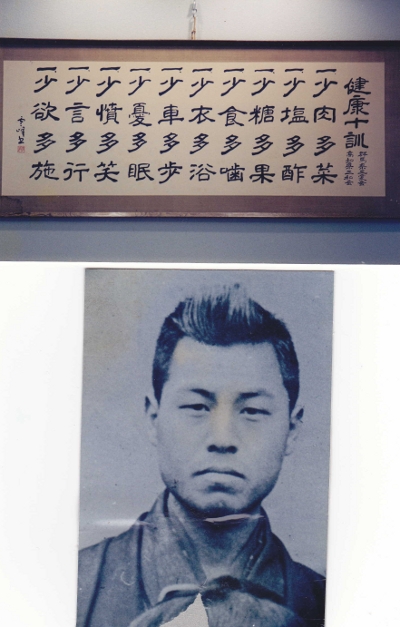 My uncle Kindo (Seppo) Seki
and his framed hanging scroll


July 10, 2010
The story of a faithful dog
In the early Taisho period (1912-26) my ancestral family was running a paper mill. They were producing hand-made Japanese paper which had long been a tradition of Kochi. My grandfather and his brothers began experimenting with a new method of Japanese paper making in present Tosa city in the Meiji period and moved to Kamimachi in Kochi city to build a large factory. Their business thrived until July 1945, when the factory was burned down in the massive air raids of Kochi city.
This is what happened one day in the early Taisho period. My mother's black puppy "Esu" had fully grown by then. He began barking furiously around midnight. Hearing his usual way of barking, my grandfather got up to look around, but could not find anything out of ordinary. "Esu" continued to bark facing the northern gate. My grandfather thought it could be a thief and opened the gate only to find smoke rising from the factory across the street. It was a fire! "Esu" must have smelled the smoke and tried to let his master know by barking loudly. The fire started at the furnace, but was put out quickly without any serious damage thanks to a timely discovery. The heroic stories about the faithful dog "Esu" are plenty. When they went to Kagamigawa River for a swim, he raised an alarm by barking when he saw a drowning man in the river. He is also said to have brought back the master's walking stick left behind. This nearly 100-year-old photograph helped me picture what the dog was like.
This rare photograph was taken by a mystery man in May 1920, with my grandfather and his brothers in it, who had started a paper making business. They were just about to transport a load of products on a large two-wheeled cart when this photo was taken. In those days, there were no 35mm roll films; they used quarter plates or smaller ones, instead. I will introduce this mystery man in the next chapter, who tried his hand at anything new in the romantic period of Taisho and left this world young at 36, the same age when Ryoma died. 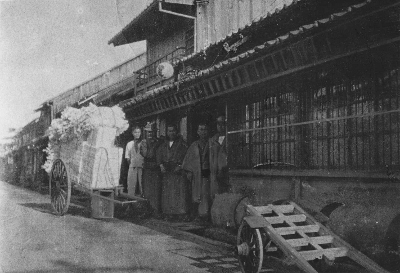 My grandfather and his brothers at their paper mill.
Photographed in May 1920


July 7, 2010
This year's Tanabata star festival did not experience any rain, which was rather unusual. Even some stars were visible. Not many families celebrate the Tanabata festival at home these days, but when I was a child, we always celebrated the festival every year. The main force behind the our celebration was my mother who was somewhat inclined toward superstition.
She erected two bamboo poles in the courtyard and tied them with a straw rope, under which she placed what looked like an altar and offered food on it. During daytime, we wrote our wishes on numerous paper strips to hang from the branches of the bamboo trees. In night breezes these paper strips made rustling sounds and stars were shining over them. In those days, it was customary to mark the Tanabata festival around mid August according to the lunar calendar, by when the rainy season had long ended and weather was quite stable.
Around that time of year, the magnificent Milky Way spanned the sky over Kamimachi. I have fond memories of the evenings when we listened to the elders' stories of the old days sitting on an outdoor bench. Late at night, we would feel a hint of autumn creeping upon us and felt chilly.
The photograph below shows our Tanabata festival celebration in our courtyard around 1915. You might say you can see only white paper strips? Well, this photo is 100 years old, after all. At far right a woman dressed in summer kimono is holding a black puppy. It is my mother. The dog was named "Esu" and he grew up to become a very useful member of the family. I will tell you about him later.
Who on earth took this photo 100 years ago? It was taken with a home-built compact camera and even the processing and printing was done at home. It was pre-Leica days. There was no photo shop in town, either.
This mysterious man played the violin and it was the first in Kochi prefecture. He also built a radio receiver by himself to listen to radio broadcast from distant places. NHK's Kochi Broadcasting Station did not exist then. This eccentric man in my relatives will be introduced later. It is a kind of mid-summer mystery. 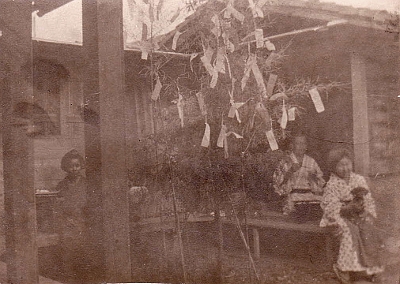 The courtyard of the Seki residence around 1915.
Photographed by Kindo Seki