May 14, 2010
We had a beautiful clear day, typical of mid May, and numerous carp streamers were swimming vigorously in the sky. But unseasonal cold northerly wind was blowing with temperatures lower than usual.
Walking along the bank of Kagami River, 200 meters away from home, I found a group of "Kamimachi strollers". They were tourists from outside Kochi prefecture and had joined a tour organized by a hotel in Kochi city. There was a stone marker standing beside the group's tour guide. It reads: "The 6th Division east of here". A particular division was designated to be in charge of reconstruction during the Shogunate ruling when flood damage occurred by overflowing Kagami River. The engraved words on the stone marker seem to indicate that the area east of it is the 6th Division. In those days Kagami River often flooded the dry riverbed and affected people living there. Having their castle on the northern side of the river, the masters of the castle of Yamauchi family built levees to allow flood water to run onto the area south of the river. It was initially a farming area, but later many houses were built. As a result, the area suffered flood damage whenever the river flooded.
While standing on the bank of the river, I recalled the air-raids of Kochi city of July 1945. I was standing here among people who had escaped fires. I was looking for my mother separated by the air-raids. Then, a firebomb landed close to me and I dropped to the ground. The northern sky was burning red just like aurora from fierce fires. 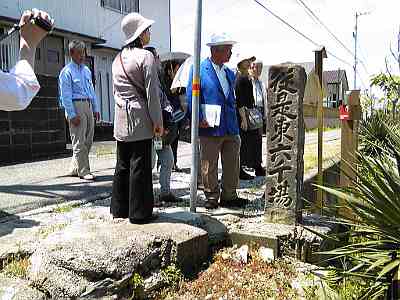 May 2, 2010
With the beginning of the successive holidays in May, a lot of tourists are visiting the city. Here in Kamimachi, where many Ryoma-related sites are located, the streets are bustling with "Kamimachi strollers". Joining these tourists, I strolled around my home and found a monument along a busy street which marks the site of Chojiro Kondo's residence. Kondo rose to the movement of opening the country and regarded like-minded Ryoma as his brother. Later, he was rebuked for his hasty action and ended his young life at the age of 29. 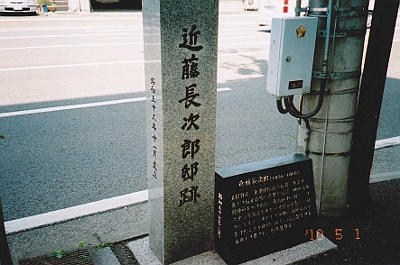 The monument to mark the site of Chojiro Kondo's residence


About a minute walk to the west, there is a house called Saitaniya, which is said to have been the store run by Ryoma's ancestors. This place is also continuously visited by tourists in groups of twos and threes. Incidentally, Rhyoma called himself "Saitani" at the time of his assassination at Omiya store near Shijo-Ohashi in Kyoto.
The sky is exceptionally clear today, typical mid-May weather. Fresh green leaves are everywhere and "carp streamers" are swimming in the blue sky to mark the Children's Day. 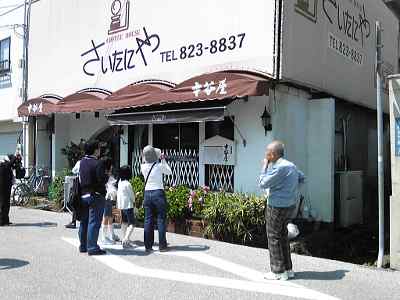