March 22, 2010
It is not the peak of the spring season yet, but Kochi Koen park around Kochi Castle is extremely crowded with people coming out to view the cherry trees in full bloom. Because of NHK's "Ryoma-den" (the Story of Ryoma) broadcast nationally as well as a local event of Tosa & Ryoma, many visitors came from outside Kochi prefecture. The castle seen through the pine tree branches in the photo is the national treasure Kochi Castle, after which a minor planet was named (Otakasakajyo). The last master of the castle was Yodo Yamauchi. I believe Ryoma Sakamoto lived in town but did not frequent the castle as he was a low-ranking samurai.

There are a number of castles thought to be the model for the famous song "Kojo no tsuki" (the moon over the ruins of the castle). I think Kochi Castle is one of the possible models because Bansui Doi, who wrote the lyrics of this song, had relatives in Kochi city and frequently visited Kochi Castle.
At night, numerous paper lanterns under cherry trees are turned on and people enjoy parties till late. These red paper lanterns bring back a memory of my childhood, the memory of the night-time cherry blossom viewing accompanied by my mother. What remains in my memory is red lanterns projected into the dark sky and how scared I was while walking home in the dark holding my mother's hand. While walking past the tall white walls of the prison on a pitch-dark night, I heard kirigirisu (katydid) singing in the grassy ditches along the road. Their high-pitched chirping is still ringing deep in my ears.
My first encounter with the stars was five years later, when I was in 3rd Grade of elementary school. Just like the red lanterns, Orion blazing over Akaoniyama mountain is still etched in my mind with extraordinary clarity 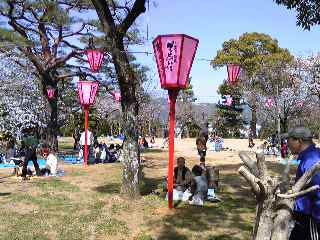