February 16
Every year I receive the New Year greeting cards from Mr. Keiichiro Okamura and Koichi Ike, but not this year. While I was concerned about their health, Mr. Okamura dropped in riding on his bike. He looked quite well. He resigned from his staff post at Geisei Observatory due to his "advanced age", but he certainly looked capable of continuing his work. As he had been one of the longest serving members of the observatory since its beginning in the 1980s, we wanted him to stay on. At the same time, we cannot impose on him because he says he finds a nighttime driving rather unsafe. Mr. Okamura says he will attend an annual staff meeting at Kochi Prefecture Culture and Education Association on February 26. At the observatory's Learning Center a superb replica of William Herschel's great telescope built by him is being displayed reflecting his excellent service to the observatory.
Mr. Ike, on the other hand, moved to Chiba prefecture about 10 years ago, where his son was living, and since then our communication has been sporadic and at times lost. My discovery of Comet Seki-Lines in 1962 was the beginning of our long association. He was a passionate comet hunter himself, but his efforts did not bear fruit for 30 years. As he became interested in comets when Comet Okabayashi-Honda was discovered in 1940, his comet search spanned well over half a century. During this long period, he encountered the apparition of Comet Ikeya-Seki and Halley's Comet and ran far and near chasing these comets. When Comet Ikeya-Seki approached the sun as close as 0.006 AU, it was too dangerous to observe. But he continued to watch the comet helped by his characteristic enthusiasm and ingenuity and acquired very important observation data when the comet was grazing the sun. I believe he was the last observer in the world visually confirming the comet plunging into the sun and the first to observe the reappearance from behind the sun.
In those days I often rode a bike to his home in Tosa City, 20km away from home, as I didn't drive a car. A 3-meter dome was glistening on the rooftop of his three-story home, which housed an unusual camera. This was a type of Maksutov camera devised by Mr. Ike himself and built by a specialist optician in Kyoto. The camera boasted a 15cm corrector plate and fast f/2.5 optics. Needless to say, the goal was to discover a new comet, but his search concluded without a single discovery. (He managed a long-established electrical appliances store.)
After many years I visited Tosa city where he used to live. The building on which his observatory stood has been changed to a multi-purpose building and the rooftop dome was long gone. Ishidonomori Mountain, which I had climbed with Mr. Ike, was shining with never-changing gracefulness in the northern sky, as if nothing had happened over half a century. 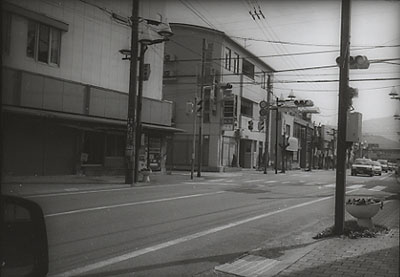 The building at center is the one on which Mr. Koichi Ike's observatory was standing.


February 10
(to continue from February 4)

In those days, when you found a comet, things didn't happen quickly. There was no Internet and no fax facilities. All the discoveries were reported by astronomical telegrams.
I lived in one of the row houses inhabited by the poorest of the poor. We had no telephone connection and I had to ride a bike to the telegraph office whenever something urgent happened. Consequently, Tokyo Astronomical Observatory might have found it difficult to communicate with me, a discoverer of comets.
One week had passed since the discovery and I was told something unusual had occurred. I wasn't quite sure what it was, but according to a postcard from Mr. Minoru Honda, Comet Seki-Lines was reported to have brightened. Around that time, the IAU Circular provided the orbital elements calculated by Dr. Cunningham. It gave perihelion at April 1 of that year with a heliocentric distance of only 0.03 AU. This unusually close encounter with the sun implied that potentially this comet would become a great comet.
Regarding the discovery of this comet, Mr. Shigeru Kanda of Japan Astronomical Study Association said that the discovery of a comet by an amateur so far away from the sun was uncommon. Many of the discoveries by comet hunters were made in the vicinity of the sun, but my discovery was made when the comet was nearly 180 degrees away from the sun and as far south as -40 degrees in declination. Consequently, Mr. Tomita of Tokyo Astronomical Observatory, Mr. Ichiro Hasegawa of OAA, and others asked me what had made me search that particular part of the sky. My reply was given in the previous entry in my diary.
There is one more episode to tell you about the discovery of this comet. Here enters a mysterious person called Koichi Ike, a long-time resident of Tosa city (20km west of Kochi city). He had been interested in astronomy for many decades. You could tell how long ago it was from the fact that he actually observed Comet Okabayashi-Honda in 1940 (on the eve of the breakout of World War II) and Comet Cunningham in the following year. Perhaps, none of you have seen these comets. I have a recollection that when I was a third grader I read an article in Shokokumin Shinbun, a newspaper for young readers, about Comet Cunningham having become a great comet in the evening sky. Mr. Ike told me that the comet had appeared majestically in the autumn evening sky of November with a trailing tail in the constellation of Aquila. This comet appeared in Juza Unno's science fiction "The Martian Army" serialized in the same newspaper. It is this novel that stirred my interest in comets. A young boy fascinated by the universe looks at the big sky from the elementary school playground and grows up to discover comets. And he has the honor of having his comet's orbit calculated by Dr. Cunningham he admires. Life is full of strange coincidences and happenings. One of these strange coincidences is my visit to Juza Unno's birthplace who authored "The Martian Army".
Unno wrote mysteries mainly in Tokyo, but the idea of "The Martian Army", which popularized science fiction in Japan, was said to be formed at his birthplace in Tokushima city. About 10 years ago, I visited his home and actually sat at his writing desk in his study. It was a small Japanese-style room surrounded by sliding paper doors. The old, somewhat desolate pictures painted on these doors resembled the barren landscape encountered by the crew of the rocket from the earth when they landed on Mars. Novels in those days were accompanied by illustrations drawn by master illustrators to excite the reader's interest.
In his novel a group of space explorers landed on the moon supposedly for the first time to find an empty tin can there. This sort of plot could be conceived only by science fiction writers and heighten the reader's anticipation for more suspense.
Comet Ikeya-Seki of 1965 approached the sun at a very close distance of 0.006 AU. Comet Seki-Lines turned out to be a prelude to the discovery of Ikeya-Seki.

February 4
This is February 4th, the beginning of spring in the lunar calendar. On this day every year, I reminisce about the time I discovered Comet Seki-Lines at my roof-top observing platform, which was also used to hang laundry.
Late at night, I drove toward the observatory, but, not quite sure of weather, decided to wait on the farm road near the observatory. In a clear patch in the southern sky, the stars in the area of Canis Major and Puppis were coming and going. The second magnitude star Zeta Puppis was shining more brightly than usual. The discovery drama of Comet Seki-Lines on February 4, 1962 began unfolding near this star.

It is often said: "To discover a comet, you should not want to find one." The discovery of Comet Seki-Lines is a typical example of the success with this mind-set. And the legendary comet discoverer Mr. Minoru Honda adds that to discover a comet the lens of the telescope must be optically of the highest quality. The 87mm-aperture f/7 refractor I was using at that time was the best of the master mirror maker Mr. Namura's. Combined with the matching 35mm Erfle eyepiece it displayed bright and almost three-dimensional razor sharp star images. This helped to detect faint comets in spite of a smallish aperture of the lens. My mind was forever drawn into the world of the stars by the images of unsurpassed beauty created by the superb lens. This was undoubtedly a very important factor for the discovery.
This lens helped me to detect a faintly glowing comet in Hydra under bright moonlight on the morning of September 19, 1965. This was the very important discovery which turned my life around. This lens, small enough to sit in my palm, became the beacon that illuminated the universe for me.
Returning home from work late at night on February 4, 1962, I climbed onto my roof-top observing platform (which doubled as a laundry drying area) as soon as I had walked through the gate. In the southern sky the magnificent winter Milky Way appeared as the waterfalls of glittering light. My lens began wandering through the glittering waterfalls with my mind free of any ambitions. This was my well-established routine for sweeping the sky. There was no desire whatsoever to find a comet quickly. I was completely mesmerized by the gracefulness of the constellations seen through the lens crafted by the master and forgot all about the passing of time.
It was a little before 24:00, the start of the new day, that I spotted the image of a fuzzy comet near the second magnitude star Zeta Puppis. It was so low in the sky that a part of the 3.5-degree field of view was blocked by the roofs of the houses in the south. This was nothing short of a miraculous discovery. And incredibly, another observer in Arizona, USA, was watching the same area of the sky low on the southern horizon.

My reminiscence was interrupted when I saw a police car coming toward me with the revolving red emergency lights. They might have thought the presence of my car suspicious. It was the second time that this had happened.
It was one kilometer to the observatory. Encouraged by the clearing sky, I decided to go to the dome. 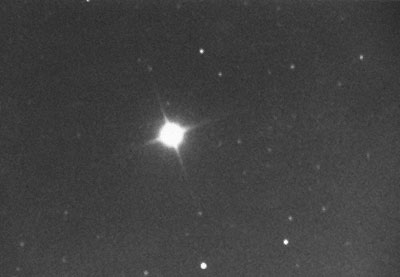