October 21
The sky has been perfectly clear since the morning.
Forty-three years ago today Comet Ikeya-Seki plunged into the sun's corona. The day was clear without any hint of cloud in the sky just like today. I saw white powdery substance floating abundantly in the air. What differed then from today was my observing site at home had been crowded with reporters since the morning of that day.
Comet Ikeya-Seki was passing through the 1-million-degree corona. Everybody was looking up at the sky from curiosity as well as anxiety, believing it was the day the comet would expire. There was a report from Hawaii, which was ahead of us in time, that the comet had been seen broken up in pieces. Meanwhile, at Norikura Solar Observatory in Japan, their coronagraph captured the comet approaching the sun early in the morning and they announced that the comet had evaporated in the corona at 1.15 pm. We were terrible shocked by the news. The magnitude of the comet was announced to be minus 12, brighter than full moon, according to an observation by Mr. Minoru Honda at Kurashiki Observatory, who had managed to see "the last" of Comet Ikeya-Seki.
The truth is that the comet reappeared in the early morning sky a week later having undergone enormous changes no one had expected. However, there was one person who had expressed the impression of this Comet Ikeya-Seki in music as if predicting the healthy reappearance of the comet. Living halfway around the world in the southern hemisphere, he composed impromptu the
music titled "Comet Ikeya-Seki" after seeing the comet plunging into the sun. In the southern hemisphere Comet Ikeya-Seki was easy to see and people were agitated by a thought of impending "the end of the world". On NHK 1 TV they reported a serious-looking ritual conducted in Nepal's capital, Katmandu, with the King's attendance, to ward off evil spirits. Mr. Jose Caleyo of Cuba, the composer of "Comet Ikeya-Seki", must have seen with the sense of awe the comet streaming across the daytime sky and turned his impression of the comet into music.
The music Ikeya-Seki was delivered to me shortly. It was no doubt a work of a professional composer and the musical notes beautifully captured the appearance of the comet streaming across the sky with strength and splendor. Was Mr. Caleyo, like me, convinced of the survival of the comet ?
Forty years have passed since that day, but the music Ikeya-Seki had never been played during these years. What is Mr. Jose M. Caleyo like? What thought was he trying to put in the music when composing it? The mystery was just about to be forgotten forever unsolved when good news was delivered to me. A TV personality nicknamed "Postman" was going to travel all the way to Cuba to visit Mr. Jose Caleyo. He will eventually find out if Mr. Caleyo is still active in Cuba as a composer after the passing of 40 years. Postman has left Japan with a photograph of Comet Ikeya-Seki and my personal letter to Mr. Caleyo. The letter notes that a minor planet was named after him as the composer of Comet Ikeya-Seki. I am hoping, almost praying, that my letter safely reaches Mr. Caleyo.
A comet becoming music is unheard of. I hope this music is going to be played by his music band and that I can have an opportunity to hear it. I am dreaming about the day when it is performed under the beautiful starry sky in tropical Cuba. "Keep going, Postman. Where are you now?


October 11
The day I got a lucky break

At 5 o'clock on the morning of October 11, 1961, autumn stars were brightly shining in a cloudless sky over Kochi city. The sky over the city with a population of 250,000 was absolutely quiet and twilight was encroaching on the horizon. I was absorbed in numerous drifting stars across the lens. My mind was completely free from any kind of thought. It was only 10 degrees above the horizon and I was searching as if trying to push the brightening twilight back.
At that moment I happened on a great chance. Among sharp images of the stars, my crystal clear mind captured a faint pale image of a comet. It was the very moment when my life irrevocably changed. Until then I was struggling under dark water. It was the moment I sprang to the surface of the brightly shining water. It is very strange that one's life can be changed by an opportunity you encounter. As soon as I found that glow I was convinced it was a comet. It was because I knew fully well from my long experience of comet search that in the vicinity of Beta Leonis was there no object which I might mistake for a comet. The new comet C/1961 T1 was 7th magnitude and sufficiently bright, but the coma was as small as 2' across. It could have been easily missed unless you were using excellent optics, as it could not be distinguished from a faint star.
The comet which turned my life around had left for a long journey to the edge of the Solar System with an orbital period of 800 years. The same day, forty seven years after the discovery of that comet, I was searching Leo at Geisei observatory using my comet seeker, just like that fateful day. Needless to say, I could not see any comet, but, while looking through my comet seeker, my heart was full of satisfaction that I had been watching the stars I loved so much for half a century since that day.
That 9 cm comet seeker still shows me the stars at times. Though it has retired from active duty, it sometimes accompanies me to public lectures and, standing next to me on the stage, makes my talk more interesting. The lens never forgets the very image of the comet and excitement of the discovery. 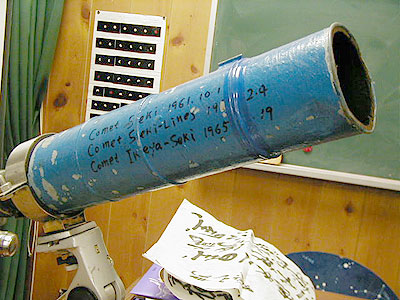