May 19
I observed from the night of May 19 until the dawn of May 20. Two comets can be visually observed now: C/2007 E2 (Lovejoy) and 96P/Machholz. C/2007 E2 is moving west in the evening northern sky and 96P/Machholz is high in the eastern sky in the early morning. Lovejoy appears as a small faint glow of 11.5 magnitude in the 20cm refractor and shows a sharp 15th-magnitude nucleus in a photograph taken by the 60cm reflector. Shortly, it will become undetectable visually. Comet Machholz has brightened as it has moved closer to the sun. Its total magnitude is around 12th magnitude. Due to its fast motion it trails like a star with a 10-minute exposure by the 60cm reflector. A very large faint glow spreads broadly. Unfortunately, this extensive glow may not be captured by reflectors with large f-ratios. 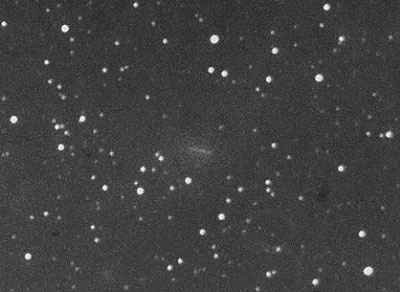 After observations at the dome, I moved to the roll-off observatory for comet search for about an hour until dawn. M31 and M32 in Andromeda drifted into the field of view and were surprisingly bright. The transparency that night seemed to be excellent. A little earlier I noticed the presence of a reddish 2nd-magnitude star 5 degrees west of Gamma Andromedae. The color of the star resembles that of a ripen Chinese lantern plant (ground cherry). In the 15cm telescope at 25x it was clearly disk-shaped and 30" in diameter. The moment it entered the field of view, I thought it was Mars. It looked just like Mars on its close approach. But come to think of it, there shouldn't be any planet this far from the ecliptic. It was completely stationary shining for more than half an hour until dawn. Although I was wondering what this object was, unconsciously I must have decided it was Mars and moved away from that object.

After returning home, the question about the identity of that object started nagging me. I don't know its exact position, but fortunately the altazimuth mounting was equipped with setting circles and I had written the observed position in a corner of the field notebook.
This object looked very unusual, shining crimson near blue Gamma Andromedae with a similar brightness. On May 16 there was an "incident" where a 2.7-magnitude star was discovered by Tsuchinshan Observatory in China and then lost. If this object I saw becomes lost too, it will be a mystery like Tsuchinshan's object. What is the identity of that star shining redder than Antares? The summer mystery season has begun!

May 15
I had visitors on May 14 and 15. They were Mr. Sasaki, a reporter for Tenmon Guide magazine, Mitsuru Ebina, a cartoonist and author, and others. They came to see me to write an article about me. At the last Comet Conference in Niigata prefecture, they asked permission to interview me. The cartoonist Mr. Ebina told me that he had become interested in astronomy when he was a junior high school student, after his encounter with Comet Ikeya-Seki in October 1965. The monochrome photo of the comet he took from Beppu City was remarkable and I used it in the Memorable Comets section at my website.

During the interview I told them that I had begun dreaming about comet hunting after seeing Comet Honda when I was a high school student. I also told them about the hardships I endured until my first discovery, which was not widely known. They took photographs of me with Geisei’s old but still active 60cm reflector. Because this 5-ton telescope is plagued with trouble of the electronic system, I have to use brute force to turn this telescope. I must have looked like doing the lifts in the gym or a gunner desperately wrestling with a 28-cm cannon in the Japanese army during the Russo-Japanese War (1904-05). People burst out laughing at the sight. (I secretly go to the gym to build strength to maneuver this heavy telescope.)

The 60cm telescope has been operated manually for almost one year because of the unrepairable faults. But this doesn't interfere with my observing, as the coordinates are still digitally displayed accurately. It is interesting that within large astronomical telescopes reside microscopic components.

At the time this telescope was installed, I vowed that I would stake my life at a "dual" with this telescope. It seems it is becoming a reality. I hope the Tenmon Guide article conveys to their readers with photographs and texts my dedication and devotion to astronomy. The article will be published in the July issue. They told me that they would interview other comet hunters for future articles.

May 7
A long spell of fine weather is likely to follow this rain. In my previous diary entry, I wrote about seeing a bright satellite. A prompt investigation by Mr. Hirohisa Sato in Fukushima prefecture revealed that it was the International Space Station. There is no doubt about the identity of this satellite, as it matches the predicted brightness and timing.

I have just observed two bright comets C/2007 E1 and C/2007 E2, taking advantage of fine weather following the rainy day. E1 in the evening sky could not be detected visually and in an image taken by the 60cm reflector it was 15th-16th magnitude with a relatively clear nucleus. C/2007 E2 (Lovejoy) had been visible in the predawn sky, but has moved north rapidly and become visible in the northeastern sky before midnight. In the 20cm refractor at 60x it appeared very diffused. The comet was 9.6-9.7 magnitude and its come was 4 minutes across without a tail. In a photograph there is a 13th-magnitude sharp stellar nucleus. This comet will move further north and will become a circum-polar object. I wonder if a comet of this faintness can be detected visually. If you could detect it with a suitable comet seeker, you would be a very promising comet hunter. The moment I saw this comet, I remembered Comet Denning-Fujikawa, which appeared in 1978 and then disappeared. It was very similar to Denning-Fijikawa in brightness and appearance, though it was a completely different comet.

May 3
On May 3, during the May holiday, I visited Ashizuri Peninsula. It was quite a while after my last visit. While driving along the national highway, I always appreciate the strikingly beautiful Ohkinohama Beach near the base of the peninsular. The beach is picturesque with white sand and lush green pine trees, beyond which lies the blue sea extending as far as the distant Ashizuri Peninsula. It makes you feel it almost inapproachable with its overwhelming beauty shrouded in mist. But it was different today. The beach was dotted with numerous people enjoying swimming. They looked like ants swarming the beach. Attracted by the charm of the beach, I tried to walk down to the beach, but all the parking spaces along the highway were full with a flood of cars. I gave up and drove along. I was surprised by the presence of so many people on the usually deserted but beautiful beach. 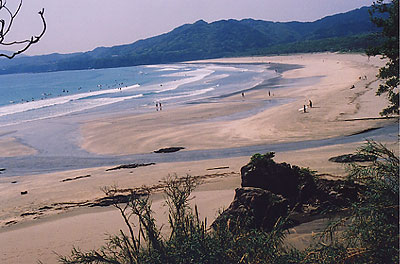 
Driving about 4 hours from Kochi City passing through Shimanto City, I arrived at the destination, the ruins of Tojindaba. It was the site where the articles left by people from ancient China (about 2000 years ago) were uncovered. It was near scenic Ashizuri Skyline road. In a dense forest large rocks of peculiar shapes emerge here and there resembling the gigantic statues of the Easter Island. The largest of these rocks were the size of a 6-mat room (roughly 3.6mx2.7m). There was a rock of an usual shape called the "Turtle Rock", which looked exactly like a turtle. Another rock with razor-sharp edges soared into the sky like the peaks of the rugged Alps. And there was a small shrine in a cave among huge rocks and mysteriously you would sense in
the air the presence of spirit. Hidden in this cave, there is perhaps ancient history unknown to us. 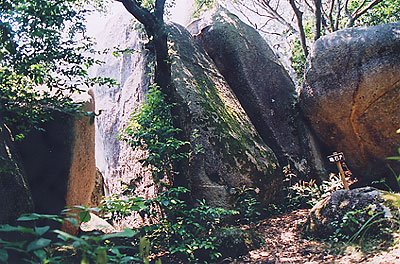 
I remember that I "explored" this area about 5 years ago with Mr. Okamura and Mr. Kawazoe, staff members of the observatory. I visited the magnificent garden of a Mr. Kataoka, whose family had been engaged in farming for generations. There was an artificial mound or miniature mountain in the garden. We visited his garden as we had heard that a cave among peculiar rocks on the mountain let sunlight pass through only on the day of the summer solstice. I believe our visit fell upon the summer solstice day, still early in summer. Although it was a summer day, the mountain was covered with flowers and clear chirps of bush warblers were echoing in a fresh highland wind.

From the ruins of Tojindaba I was able to see the sea around distant Ashizuri over extensive green farms. The white lighthouse at the tip of the peninsular looked tiny in haze and a white passenger liner going far beyond it was floating like a toy ship.

Sea around the southern tip of Ashizuri Peninsula


I left the highland wondering what sort of nigh skies would spread overhead at night. There is romance and mystery about Ashizuri Peninsular. The day I spent at Ashizuri was like a day at the utopia depicted in an ancient Chinese novel.