February 27
I gave a talk at the town of Tosa at the end of February. There was a faint sign of spring in the air. The participants were members of "the University of Senior Citizens" (the Japanese equivalent of the University of the Third Age), who are over 65 years of age. At lectures like this I always notice that 90% of the audience is ladies. The same trend is seen in Kochi City. I wonder if women of this age are more interested in opportunities to learn than men or men find it difficult to attend such talks. There are so few men in the audience that I have to look for them. All of the 100 participants listened to me with great interest.

I told them that, when Ryoma Sakamoto was born at Kamimachi in Kochi City on November 15, 1835, Halley's Comet at perihelion made a magnificent appearance over the roofs of the houses at Kamimachi. Ryoma (meaning a dragon horse) was named after a "flying dragon" in the night sky, which was most likely Halley's Comet. I also told the audience that Mr. Saizo Goto from Aki City, Kochi prefecture, who had built Geisei's 60cm reflector, saw Halley's Comet when he was young. He had a burning desire to see the comet for the second time, but had fallen ill and passed away before his dream was realized. But his wife Mrs. Tomeko Goto fulfilled her husband's wish by successfully observing the comet for him with Geisei's telescope her husband had built. I recited Mrs. Goto's poem to the audience:


The star of Ryoma* and the star of Goto**,
flying around the sky,
together seeking Halley's Comet.


Both Ryoma and Mr. Goto, now turned into asteroids, are flying through space, I told the audience.

The town of Tosa, where I gave a talk, is near famous Sameura Dam. I returned home via Kuishiyama Mountain (1180mjinstead of driving west through Otoyo town.

February 26
Mr. Isamo Akita of Joyo City came to see me. He has been serving as president of "Hoshi no Hiroba" (the Star Square) for many years. He was accompanied by Mr. Hongu and Mr. Kameyama who work for NTT (Nippon Telegraph and Telephone Corporation).

It was around 1975, I believe, when the American comet hunter Mr. Bortle visited me. If my memory serves me correct, Mr. Shigeru Yoshida and Mr. Akita were with him. After showing them Geisei's facilities, I took them on a sightseeing trip to Muroto-misaki (Cape Muroto). Mr. Yasuo Yabu and Mr. Syuichi Nakano joined us, too. At that time Geisei's 60cm reflector hadn't been installed yet. I think it was a little before the great comet West appeared.

I showed them our equipment inside the 6-meter dome at the observatory. Mr. Kameyama is a member of NTT Astronomy Club and quite knowledgeable of telescopes. He gave me advice on Geisei's future facilities. He visited Mr. Koichi Ike at Chiba and told me about him. Mr. Ike was a comet hunter who had lived in Tosa City in Kochi prefecture for many years. Mr. Kameyama showed me a photograph of a 12.5-cm comet seeker refractor, Mr. Ikefs long-time favorite. This refractorfs superb objective lens was ground by the renowned optician Mr. Namura of Shiga, who also made my 9-cm come seekerfs lens. Mr. Ikefs sole achievement was the independent discovery of the periodic comet Kopff around 1964.

Mr. Ike had enjoyed searching for comets over half a century. His search results aside, he had been good company to me. At the time of Comet Ikeya-Seki's grazing of the sun in 1965, Mr. Ike and I rushed to the mountains and beaches looking for a chance to observe the comet and managed to make valuable observations. Forty years later, as Mr. Ike's grey hairs tell the passing of time, our memory of the excitement has become faded and hazy.

There must be many comet hunters in the world like Mr. Ike, who have been quietly dedicating their time and effort to comet search but without being rewarded with success. I am looking forward to talking with such hunters, whom I have never met, at the Comet Conference at Niigata prefecture in April and listening to their pains and disappointment. I am one of them who had experienced a defeat in spite of 10 years of search with a 15-cm reflector. These comet hunters will never become known to the world until they discover a comet. But they must be wonderful people dedicated to comet search, though not blessed with luck yet. 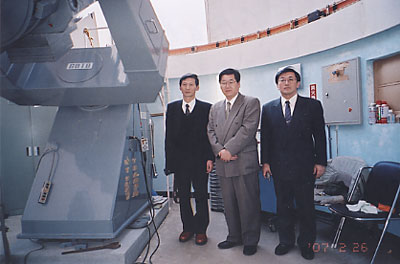 
February 23
I visited an observatory situated at Kuma Kogen Highland in neighboring Ehime prefecture on February 23. I was accompanied by Mr. Nakauchi and Mr. Takahashi from Kochi prefectural governmentfs Life-Long Learning Department. For many years Mr. Akimasa Nakamura has been taking good care of the observatory while doing excellent work in discovery and observation of the Solar System objects. Although this was my first visit to the observatory, I have often driven along the national highway via Kuma Kogen Highland on my way to Matsuyama, always wondering where the observatory would be. Normally, this area is completely covered with snow around this time of year, but on this trip there was no sign of snow anywhere due to the unusually warm winter. I found the observatory located one kilometer off the highway, farther than I had expected, and was built in a basin surrounded by mountains. I was told that fog often occurs in this area and it was one of the two places most frequently affected by bad weather in Shikoku; the other is the township of Otoyo where Kajigamori Observatory is located.

The 60cm reflector, the main telescope of Kuma Kogen Astronomical Observatory, is much more compact and light-weight compared with Geiseifs 60cm reflector. The fork-mount for Geiseifs reflector was built for a 75cm telescope. It is bulky and observers tend to be overwhelmed by its size, while Kuma Kogenfs telescope looked easier to operate because of its compactness.

There are many one-meter-size telescopes operating in Japan, but my honest feeling is that there are very few skilled observers to fully utilize the capacity of these large telescopes. I believe genuine astronomical achievements can be made largely by skills of observers, regardless of the size of their telescopes. It is well known that some amateurs produce outstanding results using small instruments no more than 20 cm in aperture. I have come to think strongly that it is of the utmost importance for observatories (including Geisei) to produce good observers, instead of boasting the large size of the telescopes. This is what I learned from this visit to Kuma Kogen Astronomical Observatory. 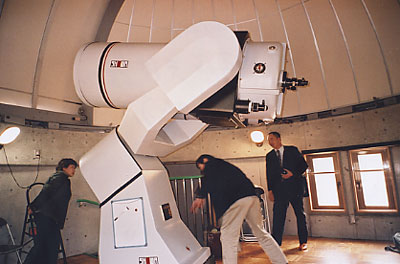 
February 13
I came to the observatory yesterday and today. Although the moon rose past midnight, the sky was quite transparent. After a photographic search by the 60cm reflector, I swept the eastern sky for the first time in many days. I avoided the southeastern sky where the moon was present and searched the sky from due east to northeast.

I discovered my second Comet Seki far back in February 1967 in Hercules. Hercules was shining in the eastern sky tonight. In those days I was using 12cm binoculars equipped with the azimuth and altitude rings to determine the objectfs position and converted their readings to the equatorial coordinates. But tonight I read the right ascension and declination directly from the  "Navigator" digital setting circles which was accurately set up. When M13 in Hercules came into view during sweeping, I found its position displayed on Navigator very well matching that on a star chart. It may be impossible to discover 11th-magnitude comets these day. I am fully aware that it is going to be a long haul to discover a new comet, but I continue to sweep the sky as a daily routine.

Very bright Vega was already in the northeastern sky and the magnificent Cygnus cross was lying stately along the mountain ridges. How beautiful the Milky Way is! Among all types of observing, I believe searching for a new comet provides the best way to appreciate the beauty of the starry night.

The 37th Comet Conference will be held in Niigata prefecture this April. I would like to share the joy and hardship of comet search as well as ambitions for the future with practicing comet hunters. As a comet hunter who experienced a defeat after 10 years of search, I understand their agonizing experience very well.