May 31
@We visited Imamiya Shrine in KitakuAKyoto. Mr. Kanai, the "elder" of the club, chose this site for a photographic session because at this shrine there was reportedly a strange rock passed on from ancient times. Imamiya Shrine looked impressive and there were a large number of worshippers in the yard viewing the historic shrine. Children, perhaps from a nearby elementary school, were eagerly sketching the shrine and its surroundings. A young woman teacher was busily shooting the shrine and designs carved on the gate with her camera.

@Near the stately gate there was that strange rock carefully placed on a traditional Japanese cushion. The rock surface was slightly darkened and showed some dents and traces of burning. The appearance of the rock made me think intuitively it could be a meteorite. I found it surprisingly heavy when I held it. Its long axis was about 20cm in length, but it was almost too heavy to lift in one hand. Obviously, it contains iron. It was also glossy, probably because so many people have stroked it.

@The sign erected by the shrine reads: "This rock named Ahokashi is also called Kamiuraishi or the divining rock. Worshipers with ill health should make a sincere prayer to the rock for recovery, stroke it gently with the palm of their hands and then massage the ailing part of the body with the hand. This will hasten their recovery..." In the town of Tosa-yamada, Kochi prefecture, they reportedly used to worship a meteorite laid on the alter. They may have begun worshipping this rock with a belief that it was accorded by Heavens just like Imamiya Shrine's divining rock.

@I thought of taking a close-up shot of the rock but found I had only monochrome film in the 35mm camera. I had used up color film photographing the white walls of the sake brewery at Fushimi. Instead, I took out my Minox A and took a close-up photo from only 20cm away. The 15mm f/3.5 Complan lens performed magnificently. 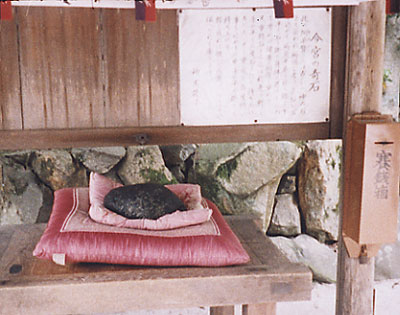 Imamiya Shrine's mysterious rock
(The rock has been called Kamiuraishi or "the divining rock" from ancient times.) 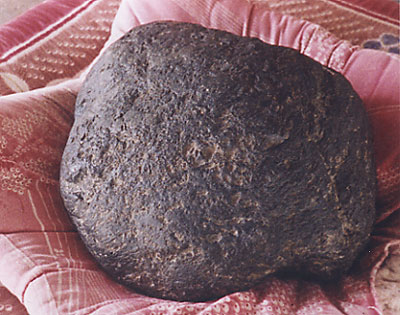 May 30
On the second day of my stay in Kyoto, the local Minox enthusiasts took us to various historical sites. I liked old sites related to the Meiji Restoration (the end of the Shogunate government and beginning of Modern Japan, 1867-1869) along Kamogawa River. I was impressed with the white walls of sake brewery cellars at Fushimi. We also stopped by Terada-ya inn nearby, where Ryoma Sakamoto had been attacked by Shogunate officials. His wife Oryo's quick thinking saved his life. Unlike Ikeda-ya and Omi-ya, which have left nothing to this day even to hint at their existence, Terada-ya has retained most of its original appearance. Sword marks on the posts of Terada-ya show a fierce fighting which took place at the inn. It is a reminder of the turbulent era toward the end of the Shogunate rule.

The central figure for the "mini" photographic session was Mr. Hiroshi Kanai, a former chairperson of Japan Minox Club. He was 91 but very active. Mr. Kanai loved miniature cameras like the Midget and the Guzzi from pre-war days; in fact, he liked any kind of miniature cameras. He has been active as a photographer too. His photographic techniques with his Minox camera has always created amazing works. I am a miniature camera enthusiast myself. I had taken a photograph of an air-raid shelter during the war using a Guzzi. It is my only picture of great importance which brings back war-time memories.

Mr. Kanai asked me if I would like to go to Imamiya-cho at Kita-ku. "You will be surprised to find something very unusual at a shrine there." (What's that unusual thing? It must be something to do with the stars....) I decided to go there looking forward to seeing that something. 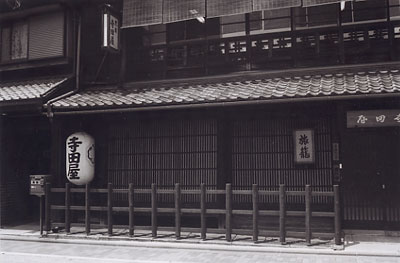 
May 29
I came to Kyoto today. I didn't bother to find public transportation and decided to walk north along Kamogawa River. I walked over a distance of 4 kilometers from Kyoto Station to Nijo-ohashi. Thanks to my decision not to use transportation, I was able to look at various famous historical sites on my way.

In a little corner of Kawaramachi along Kamogawa River, I found a lonely stone memorial to indicate the site of an inn called Ikeda-ya where the Shogunate-enlisted Shinsengumi warriors had raided radical royalists. I pictured a fierce fighting 130 years ago amidst the sound of clashing swords, which was conjured up by the sound of pinball machines heard from a nearby "pachinko" (pinball) parlor.

There had been a hideout of the royalists near Takasegawa. The place seems to preserve the atmosphere of those days. Ikeda-ya was a short hop from Omi-ya Soy Sauce Store, where Ryoma Sakamoto, a Tosa-born visionary during the Tokugawa Shogunate, was assassinated. The street landscape around there has completely changed and there is no trace of the buildings of prosperous Omi-ya. The site where Omi-ya stood is now in a small corner on the side of a busy street .

I met 10 miniature camera enthusiasts from all over Japan at Hotel Fujita near Nijo-ohashi. They were the collectors of Minox cameras. There will be a small photographic session tomorrow and I am intending to visit various historical sites with my Minox camera. I may come across places relating to astronomy.

The Minox camera is a masterpiece born in the 1930s in Riga of Latvia, a small country on the Baltic Sea coast. It is a precision camera with a very small 8mmx1mm format. It is a mystery who invented it for what purpose. The price of this little camera was 50,000 yen in 1950, a quite expensive, high quality camera. Perhaps it was built for spying. There was a Japanese spy movie called "Daigono Kyofu" (or a terror in the fifth row) " around 1940. In one of the scenes a spy brought a Minox out of his pocket and took a shot of the military port of Yokohama. It just looks like a cigarette lighter, no matter how hard you may look at it. I photographed Halley's Comet with my Minox for a Minox camera photographic exhibition. As you probably know, there is a minor planet named after Minox.

A memorial for the site of assassination of
Ryoma and his comrade Nakaoka.

On May 20 it started clearing up at last in the afternoon and I headed for the observatory. I began sweeping the sky by the 60cm reflector about 10 pm and persisted until past 2 am on May 21 when the last quarter moon rose.

The object I was interested in was Schwassmann-Wachmann 3. Its motion has increased and moved very quickly to a low altitude in the east. It is amazing how fast it has moved to the south. A bright moon and a haze typical of spring-time made it very difficult to see even in the 20cm refractor.

Nucleus C is 8.1 magnitude with a solid core. A photograph by the 60cm telescope shows a short but sharp anti-tail at PA 50, which is rather uncommon, though the normal tail is visible, too. As for nucleus B, it was faint 8.5 magnitude looking like a core-less remnant of a nucleus. The tail is still visible, but it has faded so much over a very short period of time.

All the above observations were made at 2.30 am on May 21. When the moon further wanes, I may be able to take better photographs. 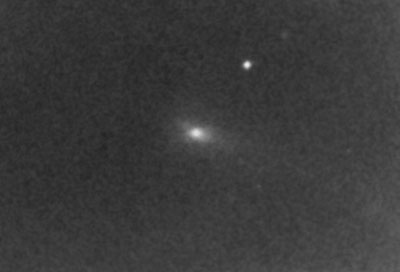 
May 11
A comet in moonlight blooms like a flower.

I arrived at the observatory late at night on May 10. I was stopped at a check point set up by a large number of police for inspection. This did not often happen to me. I showed my driver's license which proved I had no accidents nor traffic violation for the past 15 years. An officer asked me where I was going. If I said, "I'm on my way to the observatory", he would know who I was and ask me more questions. I simply replied, "I'm going to Geisei Village," and he let me through.

The Pacific Ocean seen from the observatory's hill was awesome, rather than simply beautiful, lit by near-full moon. It was shining in a mysterious blue. Nucleus B of Schwassman-Wachmann 3, which experienced unusual brightening, appeared extraordinarily large and bright in the mysterious moonlight.

The image below taken by a 3-minute guided exposure shows clearly how fast the comet moves when it is at the closest to the earth. The nucleus is sharp and extends in a fan shape giving an unusual appearance which indicates a quite recent explosion. I turned the telescope to the main nucleus C. It was diminutive and no match for nucleus B. Its coma was less than 3/5 the size of nucleus B and 1.5 magnitude fainter. This appearance of nucleus C under bright moonlight was quite predictable while nucleus B's appearance was extraordinary. Mr. Kawazoe, a staff member of the observatory, observed nucleus C with the naked eye from his home. I saw it through 7x50 binoculars without much trouble. When moonless nights arrive, the tail may be easily visible to the naked eye. It was right at 4.5 in total magnitude. The central part of the coma was 5th magnitude. Although the total magnitude was bright, it would have to be at least 4th magnitude to be visible to the naked eye. By binoculars we tend to estimate the comet's brightness considerably brighter than similar magnitude stars.

I decided to make an early retreat troubled by occasional cumulus clouds. The time of this visual observation is 1.30 am on May 11. A special public viewing night was cancelled due to rainy weather. 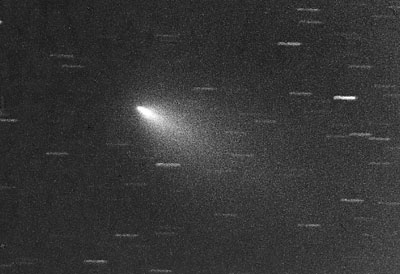 
May 2
All the "yellow sand" dust haze has been swept away and we had a magnificent clear sky today. This is a typical early summer blue sky. I left home a little later than usual and arrived at Geisei around 22.30. Schwasmann-Wachmann 3 is approaching the zenith.

Usually, I stop by a convenience store at the foot of the hill, but passed by it tonight and began climbing the north road to the observatory. At that very moment I saw a brilliant streaking light in the low northwestern sky. A moon a little younger than first-quarter was sinking slowly. That sudden flash of light made me think two moons were shining. It was approximately 22:26. A beautiful green fireball slowly moved downward and disappeared in 4 to 5 seconds. Its magnitude was -5. It was far north of Gemini and in the northwestern sky. There should be many witnesses in Ehime and Hiroshima prefectures.

Tonight's Milky Way was magnificent. Its glow stood out sharply from the inky sky background and appeared almost three-dimensional. It suggests the arrival of summer. After completing a number of observations with the 60cm reflector, I searched the pre-dawn sky for a comet for 30 minutes for the first time in many days. Altogether I spent about 5 hours observing tonight and it was quite satisfactory. Venus was shining brightly in the morning twilight. 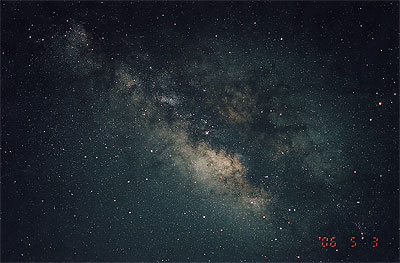