• November 18
I have been to the exhibition called "Astronomy and Almanacs" at Kochi Prefecture Literature Museum. They were displaying an astronomical telescope, armillary sphere, diary-like records related to almanacs of the Edo period.
The builder of the telescope was given as unknown, but it is a telescope built about 200 years ago by Schneider, a German company. There was also an inscription of Fraunhoffer on the telescope. This may have been jointly made by these two companies. It looks like a terrestrial telescope but is genuinely an astronomical telescope because it is equipped with the (32mm barrel) American-standard eyepieces as well as a solar filter. The telescope was probably used by forward-looking daimyo and samurai during Lord Yodo Yamauchi's rule.
How would the stars appear through this telescope? Everybody must be curious. Believe it or not, there was a man who actually looked through this telescope! He dared to take the telescope out of the treasure house secretly and observed great Halley's Comet. Who in the world committed this sort of "reckless" act? How did Halley's Comet of 1986 appear through the lenses of this telescope, a treasure of the Yamauchi family. Nobody will see Halley's Comet again through this telescope. I will tell you about this in the future.
Now it is about the armillary sphere. This was built by Keizan Kawatani, an almanac scholar of Tosa around 1760. It was beautifully made with brass. In those days observations might have been made using equipment like this. This could have been used for prediction of that particular solar eclipse. It was the year 1762. Keizan claimed that that year's government almanac failed to predict the eclipse of September 1. However, it became controversial as the astronomy officials of the Shogunate rejected the claim.
It turned out that Keizan's calculation was correct. At Mt. Hijima-yama in Kochi City, he witnessed a solar eclipse at noon on September 1, 1762, which made him smile with a total satisfaction.
One hundred and fifty years later, on August 15, 1945 (the day when the war ended), I was standing at the summit of Mt. Hijima-yama. There was an unmanned shrine at the summit where many picture prayer plaques were hung. Among those plaques I found one with an unusual picture, quite different from the rest of them and was difficult to make out. I am not sure but it looked like a drawing of a solar eclipse. There was also an old stone memorial erected at the entrance of a dark cave at the back of the shrine. It could have been a memorial to mark the site where that solar eclipse was observed. Later, all these sites were completely wiped out by landslides.
Tosa produced celestial almanac scholars such as Jinzan Tani, a predecessor of Keizan, leading the development of astronomy in early Japan. However, it was of bygone eras and Tosa is now one of the most scientifically backward provinces of the country. 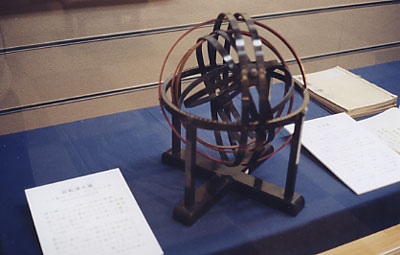 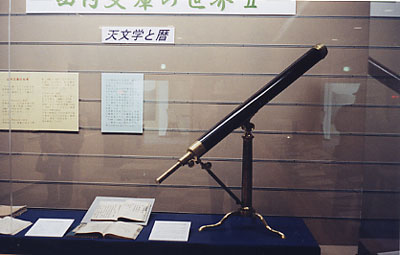 The 80-mm refractor (possession of the Yamauchi family)


• November 13
With three speakers from the National Astronomical Observatory of Japan attending, an astronomy seminar on the ALMA project was held today at Kochi Prefectural Education Center in Kochi City. It attracted very keen astronomy enthusiasts from Kochi City as well as other cities and concluded with great success. However, I was surprised to find student participants including senior high school students were fewer than expected. It could be indicative of the recent trend of young people becoming disinterested in sciences. I think this is a worrying development for us.
At a seminar like this I often run into people I never expect to see. About 20 years ago when we had a seminar at Yokkaichi City, a woman in her 30s with a school-age child came to see me in the guests' waiting room. She introduced herself. "Hello, Mr. Seki. It's been a long time since I last saw you. My name is Mrs. M. I learned guitar from you a long time ago. I am so pleased to be able to see you again." Soon I recognized her. Not long after my discovery of Comet Ikeya-Seki, magazine reporters including Mr. Seiichi Saeki, a non-fiction writer, came over to interview me and shoot lesson scenes. Mrs. M was a college student at that time and posed as a student for a photograph. "Mr. Seki, I had a crush on you in those days. Perhaps you didn't notice it." I thought that she would be able to say a "daring" thing like this because she was now a mother of a child and enjoying a very stable family life. "Some day I would like to visit Geisei Observatory with my child," she said. Incidentally, she was born at Geisei village.
The same thing happened at today's seminar, not totally unexpected, though. When my talk was finished, a gentleman who was seated at the front of the hall, walked straight over to me and said, "Hello, Mr. Seki. I am Kataoka. It's been 53 years since we last met." I had a glance at his business card to find his title Director, Board of Education, Town of Ochi. He also serves as director of the town's museum. Immediately, my memory took me back to 1952. It was soon after I joined OAA and began observing. An elementary school student at Ochi built a celestial globe and won a prize at a certain event, which was headlined in Kochi Shinbun Newspaper. When I read the article, I was so moved that I wrote him with my praises and encouragement. Four years later, when my discovery of Comet Crommelin was reported, he sent me a letter to congratulate me on my discovery. He was a junior high school student at that time. I hadn't had a chance to see him until today's seminar. Although he did not go into astronomy, the letter of encouragement from me may have influenced him positively. This reminds me of a letter I had received from my mentor Mr. Minoru Honda.
Young people today find cell phones a convenient medium for easy communication and would not be easily moved or brought to tears by reading letters. But I know how important just a single letter can become to us. My life has been changed forever by one letter from one person.


• November 7
Geisei Observatory is crowded with visitors daily for the "Mars Observing Week". It was clear tonight, too, and children from Akano Elementary School of Aki City visited the observatory accompanied by teachers. Their voices were so loud that they could split the dome! Although the moon a little younger than first quarter was shining brightly, it was a beautiful starry night with crystal clear air.
Mars viewing for the visitors finished before 9 pm and I began observing using the 60cm reflector and 21 cm Epsilon reflector simultaneously as usual. The buildings housing these two telescopes are about 30 meters apart and I shuttled between them about 20 times. I was able to make photographic observations efficiently owing to the 60cm telescope's excellent guiding accuracy. The guiding errors are often less than 1" without touching the telescope for 15 minutes. This accuracy allows me to use the 21cm telescope at the same time. Even visual search of a comet can be done.
With the 60cm telescope I targeted P/2005 U1 and recently discovered 19th- to 20th-magnitude faint comets tonight. I am not quite sure if these comets were captured on the film. It was tiring to observe throughout night until morning after arriving at the observatory at 5 pm on the previous day. Finally, I searched the pre-dawn eastern sky, while an exposure on the 21cm telescope was going on.
I searched the area around Leo while conscious of limited observing time. About 4.30 am, I caught NGC 3521 south of Leo. This has been a familiar object to me since my discovery of 1961f (C/1961 T1) and is recorded in my "memorized" star charts. For practice I sketched the field of view. As I hadn't done sketching recently. It was not easy. It would be useful to make the scale of the sketch identical with that of the star charts. For example, when a star chart's scale is 2cm per degree, you draw a 6-cm diameter circle to match the 3-degree field of view of the 12cm Nikon binoculars. I almost forgot this sort of basic things as a result of my long-time neglect.
Whenever I have time, I draw circles with compasses on plain white paper. Now these "circles" are everywhere, on my observing desk and in its drawers. By looking at them, I feel my passion for comet search has never faded. Even while operating the 60cm reflector, I am always aware that I am a comet hunter.

• November 3
This is November 3, the Culture Day public holiday. The Culture Day has a high probability of clear skies, but it has been cloudy today and even drizzled.
Since the end of October, meteors have been frequently seen. I wonder if this is the Taurid meteor shower originated in Encke's Comet. I remember seeing surprisingly many fireballs in the 1950s. The year must be 1954, because that year the second Comet Conference (initiated by Dr. Issei Yamamoto) was held at Takatsuki City. I recall that Mr. Kojiro Komaki told us that that year's Encke's meteoric swarm(*) had been accompanied by many fireballs.
An acquaintance of ours told me that he had seen huge fireworks exploding in the sky and lighting up the whole landscape like daytime two days ago. He got up at 5 am and was "taking in light and energy from the universe" at that time. It must have been caused by a huge fireball.
(*) Encke's comet is the parent body of the Taurid Meteoroid Stream.

• November 1
Transparent late-fall blue skies are now glowing above us. Around this time year 40 yeas ago, I was literally running around furiously, rushing to the beaches and mountains around Kochi City, desperate for a glimpse of Comet Ikeya-Seki. The image of the graceful comet with its long narrow tail streaming behind in the cool fall sky, is still deeply etched in my mind.
A composer called Jose Caleyo living in Havana, Cuba, sent me his composition titled "Ikeya-Seki". The hand-written notes on the score read: "I composed this music spontaneously when I heard about the discovery of Comet Ikeya-Seki. This is dedicated to the two Japanese discoverers. A comet will shine some day when this music is played."
This music score had been stored away for 40 years until I found it lately. The discoverers of the comet themselves haven't heard this music yet. Couldn't somebody play this music? Which comet will shine when the music is played? Each note on the score accompanied by vigorous rhythm stirs up my memory and emotion of the discovery.
The memory of Comet Ikeya-Seki will never fade away. 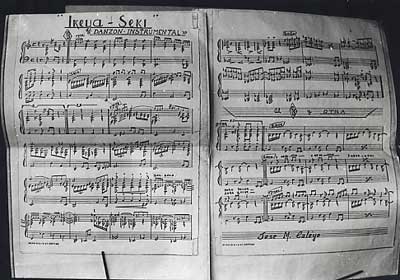