• May 10
I went to Matsuyama by Kochi Highway and drove back along Route 33 on Niyodo River, beautiful with lush green vegetation. The mileage I have accumulated over the past 10 years is 193,000 kilometers. I headed off to the observatory at night after arriving home in the evening.
People may think it difficult to observe all night throughout the year, but life-long active observing is the highlight of my life and very reason for my happiness. Discouraged by discoveries by LINEAR and other robotic search programs, some comet observers and discoverers gave up on search. However, once they have stopped observing, their past achievements, however important they are, will be forgotten. Continuing to walk along your chosen path will truly give you the purpose for living. The path to a success may be long and difficult but you should not lose sight of your ideals shining like a beacon.
While looking through a faded photo album, I found a photo taken when I was wandering deep in the mountain of Miune. It was on the eve of my discovery of Comet Seki, September 15, 1961. The long rugged mountain roads of Miune summed up my life in those days. I was enlightened by this experience and my life completely turned around on that day. It was the time I was despondent about failure to discover comets and engaged in soul-searching for a way out of hopelessness. 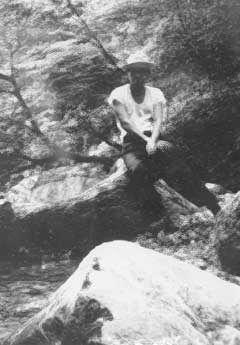 In the valley of Miune
September 1961

• May 7
We had a spring astronomy class at Geisei Astronomy Learning Center. The sky was clear all day and about 40 people gathered.     People of a wide range of age participated, from elementary school children to the elderly including some high school students. I am always impressed with the manners and attitude of people who have come to see the stars. After they had all left I was relieved to find that a large number of slippers including children's were neatly placed back on the shoe racks. They were perhaps told by adults to do so. It is great, though, that an astronomy class like this teaches children not only astronomy but etiquette and manners, which adults lament that children today fail to learn.
An outdoor constellation class conducted by the instructor Kimio Matsuki was brimming with enthusiasm. Mr. Keiichiro Okamura, who had declared his retirement owing to "advanced" age, rushed over to give a talk about the planets including Bode's Law. He impressed the audience with his characteristic humor.
Of all things the most impressive for tonight was seeing conditions. Incredibly, Saturn sat still as if there were no atmosphere and resembled stunningly clear color sketches of the past years. The Cassini Division, usually rather difficult to see, was as clear as crystal and Titan and other moons appeared so close to us. This kind of seeing conditions is rare and it can occur only once in 10 years or so. I felt the people who gathered here were fortunate. Afterwards, they enjoyed observing Jupiter and other objects until 9 pm.
As I wrote at the beginning in my book "My 50 Years with Comets", I believe that Mr. Saizo Goto, who donated this 60cm telescope to the observatory, appears as a ghost at public viewing nights hoping that the observatory is used by many people like tonight. He must be looking at the crowd from behind the thickets and pleased with this successful night. I feared that when I left the observatory tonight I might meet the old man in a white robe on the dark lane again. "Mr. Goto, the observatory you gave us is being used for good work. Please rest in peace." I walked hurriedly down the hill.

• May 3
Typical May fine weather continues. I arrived at the observatory in the evening and persisted until morning.The atmosphere was stable and seeing was excellent, but I was interrupted by occasional thin clouds.
In the evening I observed Comet Tempel 1 located overhead by the 20cm refractor at 60x. It was faint but easily visible at 11.5 - 12.0 magnitude. The photograph below has been taken recently with the 60cm reflector. A short tail, about 60" long, is visible to the south. Comet Machholz faded to the 9th magnitude in the northern sky.
At 3 o'clock in the morning I searched the low-altitude eastern sky. It has been a long time since I last searched this area. I used a new "weapon" this time. (I had been using Nikon's 20x12cm binoculars until recently.) At 30 minutes before the dawn I would move to the top of the hill and switch to the 17x9cm comet seeker. I need to do so because the tall forest in the east blocks the low-altitude sky.
My new instrument seems to be designed partly with astronomical purposes in mind and the star images are stable and excellent even to the edge of the field. It produces bright, high-contrast images perhaps thanks to multi-coated lenses. I saw an 11th-magnitude, 3'-diameter globular cluster in Bootes . I saw this globular in the autumn of 1951 once, but since then I had never seen it again for 50 years until tonight. At 4 o'clock M31, the Andromeda Galaxy, entered the field majestically.
About 30 years ago, a new 6th-magnitude comet appeared near M31 on the morning of May 1. Eight observers in Japan claimed they had independently discovered it. Eventually, it was named "Comet Tago-Honda-Yamamoto". We should not relax our efforts for discovery, as your encounter with a new comet cannot be predicted. Mr. Koichi Itagaki of Yamagata and Mr. Katsuji Ito of Aomori independently discovered this comet the same day. In the same morning I found this comet myself. Comet search brings back old memories. Even if you cannot discover a new comet, you will find comet hunting the best way to appreciate the beautify of the starry sky. Nothing else matches it. When you have reached a stage where you can search the sky relaxed and without being impatient, a discovery may not be too far. 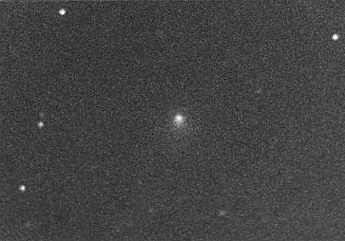