• March 25
With bright moon light there will be no observation for a while. I received a letter from Mr. Takao Namura of Yasu (old Chuzu), Shiga Prefecture, with an enclosed article published in a Shiga newspaper about Mr. Namura's work for mirror grinding. It introduces him as a modern-day master mirror maker. He has been often written about in newspapers and other media. His reputation as Japan's No.1 mirror maker is apparent.
My discovery of comets owes to Mr. Namura's lens. The 88mm f/7 objective lens produced superb images and I was acutely aware how important sharp focus was to find faint comets. I used this lens over a period from my discovery of Comet Seki in 1961 to Comet Ikeya-Seki in 1965. All the comets I found during this period were very faint and I would have missed them all without this lens's exceptionally sharp focus. It is amazing that this lens was Mr. Namura's first work. The one-meter mirror at Nakagawa Observatory, Tokushima Prefecture, was also ground by Mr. Namura. I took my 88mm telescope to the observing session held at the observatory to commemorate its opening. I remember fondly that we enjoyed watching the stars together in the dome. The day turned out into "Mr. Namura's day."
The newspaper article sent from him says that he is grinding a 20cm lens for the National Astronomical Observatory of Japan, an indication of the professional astronomers' confidence in his work.

The photograph shows Mr. Bradfield, Australia's long-time leading comet hunter, inspecting the 88mm comet seeker, which had discovered Comet Ikeya-Seki. Inscribed on the telescope's tube are the discovery dates of the three comets found by this telescope.
Mirror making in Japan seems to have started with Kaname Nakamura in the early 19th century. The tradition of mirror making in Japan has continued with the master figures such as Nakamura, then Kibe, followed by Namura. Incidentally, around the time when Nakamura was active in Kyoto, Masamitsu Yamazaki was studying in the U.S. He learned to grind mirrors while he was in the U.S. and, after returning to Japan around 1920, published a book "the Method of Making a Reflecting Telescope". He built a comet seeker (reflecting telescope) and discovered "Comet Crommelin" in October 1928. As he did not have students for mirror grinding, his method of mirror making was not passed on to others. Interestingly, this 20cm f/7 mirror was passed to the master mirror maker Mr. Jiro Hoshino of Kyushu via Mr. Tatsuo Yamada of Nagoya. It was sent to Mr. Hoshino for refiguring but I heard that that its accuracy of a parabolic surface was no better than that of a spherical mirror. I don't have a mirror ground by Mr. Hoshino, but at one time I thought of having one. He passed away several years ago, however. I fondly remember the day Mr. Hoshino walked up to my roof-top observatory (which also served as a laundry drying area!) and inspected my telescope.

• March 13
I often veer off to a beach on my way to Geisei Observatory in the evening when weather is good. A large part of Route 55, which goes from Kochi City to Muroto, runs along the coast. I went to Kotogahama Beach near the observatory. There was a slight sign of spring in the air with heat-shimmering rising from the beach sand caused by the evening sunlight. The minor planet "Kotogahama" was named after this beach 20 years ago. Rows of pines planted in 1935 were beautiful with green foliage then. Sadly, they were affected by pine beetles and acid rain and are left in an unimaginably poor condition with reddish-brown dead leaves. To make the situation worse an outdoor theater and salt-water swimming pool have been built on once-beautiful beaches, completely destroying the landscape of white sand and green pine trees, which we used to marvel at. It is annoying that they try to bring in urbane atmosphere into the beautiful countryside. We are attracted to these places because they retain the beautiful landscape of the countryside.
I shuddered when I heard that Okinohama Beach in the west, which I think is the most beautiful in my beloved Tosa, was once to be developed into a large amusement park by a city developer before the economic bubble burst. It was eventually stopped by local residents' opposition, but I wonder what an awful mess it would be now if it had been built. It is a little over 3-hour drive from Kochi City, a little too far to go on a short trip. I may visit it at the best time of the spring. Will the dream-like beach and pine trees be still untouched? 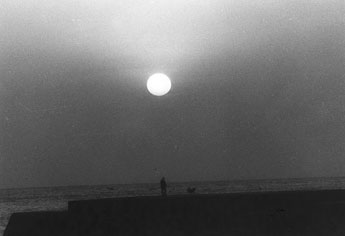