• November 30
This is the last day of November. I drove to Geisei Observatory to observe in a short period of dark sky between morning twilight and bright moon. For the first time in many days I observed C/2001 Q4 (NEAT) still bright in the northwestern sky.
I received an email from Mr. Mochizuki, who had visited the observatory on November 25. He says that he visited Kajigamori Observatory and then Kazurabashi Bridge at Iya before going home. Mr. Mochizuki designed Geisei's 60cm telescope and a minor planet discovered by this telescope was named "Mochizuki". He came to thank us for his name given to a minor planet and also to advice on and discuss the maintenance of the 60cm telescope with people concerned including the prefectural government officials. The 60cm telescope is more than 20 years old and shows its age. Furthermore, the KODAK Technical Pan Film 6415, which has been exclusively used at Geisei and a lifeline for observation, is no longer being sold. The telescope has reached a juncture with a possibility of a shift to CCDs. Geisei's fall or rise all depends on our efforts. During Mr. Mochizuki' visit at the observatory, we saw the beautiful setting sun in the autumn sky. While watching this, I hoped that this was not twilight for our observatory. I felt a tinge of hope for the future in the extraordinarily beautiful setting sun.

A commemorative photo inside the dome of Geisei Observatory
Seki and Mr.Mochizuki (right)


• November 15
On a warm clear morning, typical of autumn weather, I climbed Mt. Washio (300 meters tall), which rises high in the south of Kochi City.
Views from the mountaintop are stunning. To the north you can see the mountains of the Shikoku Central Mountain Ranges in the distance. Urado Bay, the gateway to Kochi City over the sea, can be seen from the top, too. What is unforgettable is, however, not these views. Mt. Washio is far more important to me. It was the mountain from which I followed Comet Seki-Lines in 1962. Since then 42 years have passed.
There was a torii gate (the gateway to a Shinto shrine) many years ago where I am standing now. I tested my first small refractor built in my high school days using the torii as the test object from my home. In those days I was just a novice amateur who would watch Jupiter from a corner of my backyard by myself and yell loudly with excitement. Around that time Comet Honda was shining in cool autumn skies. I cannot forget Mr. Honda's kind heart even today. He found time to reply to a letter from a young boy like me.
I started descending from the mountaintop of Mt. Washio to the east and had a break at a place deep in the dense growth of bushes where people say stray wild boars appear. Between the tree branches I saw the brightly shining mountain peaks of the Ishizuchi mountain ranges in the north. Suddenly I remembered a verse from the Japanese poet Saisei Muroo's work. "A mountain may not be tall but can be deep..." Muroo was thinking about a woman in a low mountain covered with weeds, while looking at a tall mountain rising in the distance. Unlike Muroo, I was always thinking about comets, instead of a woman, in a low mountain.
I was always thinking about ways to find comets, whether I am walking along lonely mountain paths or busy city streets. I seem to have never changed. I walked 15 kilometers over 5 hours today. And I am going to Geisei Observatory at night. 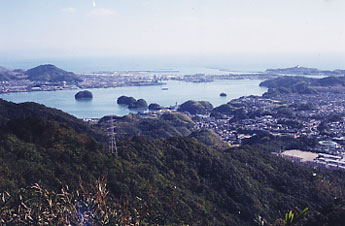 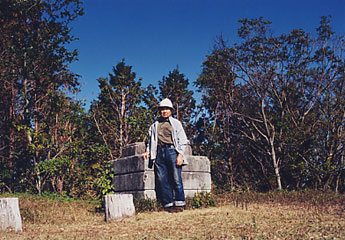 At the mountaintop of Washio

• November 10
We are now blessed with clear autumn days, typical of the season. A high school student, who came for a guitar lesson, told me excitedly, "Mr. Seki, I saw strange clouds yesterday evening. We all talked about them at school and the teacher said they could be a warning for an earthquake."
When the clouds appeared, I happened to be passing Kagamigawa Bridge and took a photo of them in the evening sky. Photographing clouds is a hobby of mine. I heard about the appearance of those clouds from other people, too. Many people must have seen them as a quite unusual phenomenon.
It was caused by airplane contrails. It was a fabric of clouds woven by a number of contrails. Warm contrails hung in the cool autumn air for a long time and happened to paint very unusual patterns in the sky.
What a beautiful but eerie scene against the backdrop of the reddened evening sky! Many people, while crossing the bridge, pointed at the clouds and stopped to watch this rare view.
I remember a story that Mr. Campbell, the then director of Lick Observatory, and others discovered a comet which looked like a contrail in the pinkish sky about 100 years ago, while watching the sun setting behind the mountains in the west. But it looked different from a cloud, as the nucleus was shining brightly like Venus. However, no observations followed the discovery and the object has been talked about as the mysterious "Campbell Object" since then.
Around that time Mr. Masamitsu Yamasaki was studying at Lick Observatory as a foreign student from Japan. He writes that lights of San Francisco were seen in the distance from the observatory looking like the constellations. 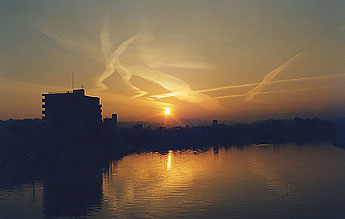 • November 3
Autumn is well in progress. Weather around November 3 and 4 is always fine. I like autumn; the sky is transparent and chrysanthemum is in full bloom. I am fond of this season perhaps because November is the month I was born.
I have received a birthday gift this year too from the person who lives in northern Japan and whom I have never met. She sent me home-made cookies with "her thoughtfulness" baked together. She also gave me a pinwheel (light wheel?) contained in a glass jar, which is powered even by a slight amount of light through the window. It is pleasing to watch the wheel, which looks like a dainty turning flower, whispering me her friendship.
I haven't met the sender M, but she is a star-loving friend, with whom I have been exchanging letters over many years. It is about 20 years ago, when she sent me a letter and ordered a copy of my book. Since then we have been writing each other occasionally. There were times when we didn't write for some time, but she has never forgotten me. There was always her clean, uncomplicated image living somewhere in my mind. It is a beautiful thing that one thinks of another person in spite of being far apart. The following is an excerpt of the recent exchange:
"I was waiting with binoculars ready until midnight to observe Comet Machholz. It was in vain, however. It may not be possible to see it from town. "
"It may be difficult, as it is still low in the southern sky and at 8th magnitude. But in December it moves further north and brightens. Look forward to it around that time."
She also wrote:
"Mr. Seki, I was very moved to find Venus and Jupiter shining side by side this morning. It was worth staying up late. "
I sent her my hand-written musical score titled "Toccata and Fugue in D Minor", which I particularly loved. She said she had recently been learning classical guitar from a teacher. It was the music I loved to play when I began to observe the stars. But I have lost the score and wrote it for her from my memory. This music immensely helped me through my younger days when I was not able to find a comet no matter how hard I searched.